The Amsterdam-based designer drew on the "indescribable beauty" of the planet for Earthrise, a collection of 19 looks shown during Paris Haute Couture Week 2021.

"Earthrise is an image of our planet without national borders, without hierarchies, without even a right side up," the designer told Dezeen.

The collection is based around themes of freedom, adventure, exploration and fearlessness. To van Herpen, these are perfectly embodied in the flights of world champion skydiver Domitille Kiger.

"When I saw Domitille flying in the sky, I felt inspired by her freedom, how she embodies adventure, exploration and fearlessness, the elements that I challenge to explore within fashion," van Herpen said.

"There is always an interesting language to find within bringing together two very different worlds; haute couture and skydiving, they both embody the traditional symbolism of flying; to leave aside everything that holds you on the ground," she continued.

The designer created a gown for the skydiver which she wore in a flight for a film that showcases the collection. Billowing sleeves and tight-fitting unitards demonstrate how van Herpen incorporated Kiger's "adventurous athleticism" into the line.

Five looks in the collection, including Kiger's gown, are made from Parley for the Ocean's recycled ocean plastic fabrics. Van Herpen believes that the collaboration will further raise awareness of the fragility of our planet.

"Sustainability is an important part within the collection development and more and more we’re using recycled fabrics in the delicate process of Couture," she said. 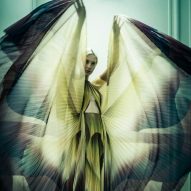 Another big influence on the collection was the journey made by Apollo 8, the first crewed spacecraft to successfully circle the moon and land back on earth.

"Stretching the skies even further, more inspiration came from the historic moment when the Apollo 8 astronauts witnessed the Earth rising above the Moon’s horizon for the very first time and the Earthrise image that was taken by astronaut Bill Anders," van Herpen explained.

"The astronauts expressed that seeing our blue home from space has caused a shift in awareness: 'When we look down at the earth from space, we see this amazing, indescribably beautiful planet. It looks like one living, breathing organism,'" she added.

Van Herpen relied on two core design techniques to make Earthrise appear as a "living, breathing organism". First, she used a fine embroidery technique on pieces such as the Sphaera Mundi dress, which involved layering fabric.

"Items express this concept by being built up from a huge amount of intricate organic layers that all organically interconnect, each layer is held up by the layers next to it, under it, or above it. They are like networks of movement," she commented.

Secondly, the designer made use of circles and earthly colours such as cool blue and bone-white to ground the collection in the earth.

"The central shape in the collection is the circle, reflecting our blue marble home and also the cyclic motion of all processes in nature," she said.

"The circle is embedded in all the layers of the process, from the pattern making up to the handcrafted circle technique in which the looks are made from thousands of individual spheres slightly overlapping."

Van Herpen has also referred to organic processes in previous collections. Her collection Aeriform explores the contrasts between water and air, while Syntopia replicates the feathers and soundwave patterns of birds in flight.