American artist Jennifer Angus has used an intricate pattern of insects to decorate a vivid pink room at the Renwick Gallery in Washington DC, set to reopen next month following renovation work (+ slideshow).

Designed to resemble wallpaper, the bug-covered wall installation is titled The Midnight Garden and was made using preserved insects from a variety of species.

Angus has arranged the specimens into geometric patterns including spirals, grids, and circles, as well as images of skulls. The patterns reach from floor to ceiling on all four walls in the room.

The delicate bodies of the insects also add texture and iridescence to the walls, as light and shadow play off their shells and wings.

Based in Madison, Wisconsin, where she teaches at the university, Angus has long used insects in her work – collecting the creepy crawlies in an ecologically sustainable way from locations around the world. She also meticulously reuses her stock of arthropods from project to project. 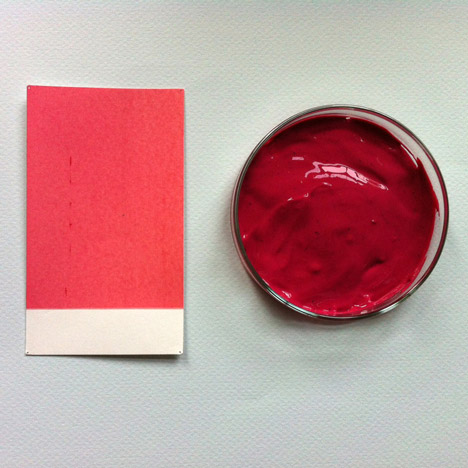 Ink made from insects by Evelien Crooy

"Many people who visit my exhibitions were never aware that such unusual insects exist," she said. "I hope that my exhibition will get them excited and perhaps they will be motivated to get involved with one of the many of the rain forest preservation projects out there. I would also like people to think about their own environment and behaviour."

The Renwick Galleries installation is part of an exhibition called Wonder, which features eight other artists including Maya Lin, Leo Villareal, Tara Donovan, Patrick Dougherty, Janet Echelman, John Grade, Chakaia Booker and Gabriel Dawe. Many of these artists use architectural-scale works to transform perception, and work on the border between art and craft.

"The concept of 'wonder' – that moment of awe in the face of something new and unknown that transports us out of the everyday – is deeply intertwined with how we experience art," said curator Nicholas R Bell. "These elements matter in the context of this museum, devoted for more than four decades to the skilled working of materials in extraordinary ways."

The Renwick Gallery, which first opened in 1874, was the first purpose-built art museum in the United States. It has been a branch of the Smithsonian American Art Museum since 1972, hosting the institution's collection of contemporary craft and decorative art.

The building will reopen next month following a two-year renovation led by Westlake Reed Leskosky, an architecture firm with offices in Washington DC, Cleveland, New York and other cities across the US.

Wonder, one of the inaugural reopening exhibitions, will be on show from 13 November 2015 through 10 July 2016.