Modelled on the head of a windswept woman, this copper observation pod is one of three holiday homes completed by South Korean architect Moon Hoon on a stone-walled plot on Jeju Island (+ slideshow).

Moon Hoon bolstered the base of the Wind House complex with lumps of volcanic rock – a material popularly used as wind break for roads and properties on the exposed island of Jeju, which sits off the coast of the South Korean peninsular.

Two ground-level houses feature board-marked concrete walls, large windows and interiors with a minimal aesthetic, while the third, covered in copper-toned scales and designed by the architect as a "hovering flower", looms over eight metres above the ground.

"The hovering flower, inspired by the wind blowing a women's hair, is frozen and abstracted to become a shape that is reminiscent of an alien, hair dryer, duck, etcetera," said Hoon.

Located an hour's drive from Jeju city, the houses sit on a plot shaped like a quadrant of a circle, flanked on one side by a curving road. The site is outlined by tall stone walls that help to provide privacy and protection from strong winds.

The marriage of different materials is intended to reference the golden foliage of trees in the approach to winter and the island's volcanic rock.

"It can get very windy, and generally the weather is very whimsical," said the architect. "The island is full of volcanic rocks in various sizes, comprising landscapes wonders to common walls demarcating ownerships." 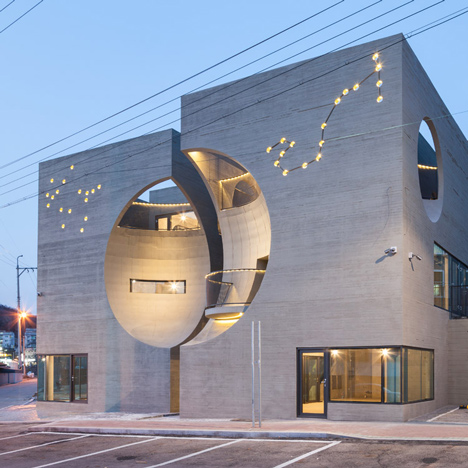 " The wind and colour of Jeju island in winter has made a strong impression on my mind and I took that as an inspiration for the project, thus the name Wind House."

Two breaks in the stone perimeter wall provide separate approach routes to the houses, which each have their own grounds and entrances.

A spiral staircase encased in a lime green well ascends to the elevated property, which is finished with zebra-striped flooring, iridescent tiles and crimson walls, and features a panoramic window overlooking the island scenery.

"The inside boasts a womb-like space painted in red and with dizzying floor colours," said the architect.

The house was designed for an ophthalmologist with a keen interest in art, music and cars – "a doctor with many curiosity and penchant for something eccentric and special," according to Moon.

"He found me through the internet and told me that the strangeness and differentness that is inherent in my architecture attracted him," he said.

"Previously I had been commissioned for an wind museum, which turned out sour," he added. "I had liked the idea and shape of it, many times I would make drawings inspired by the wind museum. I felt it was an opportune time to reincarnate and modify the initial idea."

Jeju island is growing in popularity with tourists and as a result many holiday homes and visitor attractions have been springing up. Most, like Wind House, draw on the island's rich resources of volcanic stone.

"Many artists and commoners have been inspired by the beauty and versatility of the island," said the architect. "Recently flocks of Koreans and foreign tourists are visiting the island by the thousands."

A team of South Korean architects including Wise Architecture, created an installation using basalt on the island's shoreline, while Z Lab recently finished a whale-inspired renovation of a century-old farmhouse.