Display fixtures made from jerry cans and blocks of polystyrene salvaged from the ocean feature in this concept store for a outdoor brand on Jeju island by Schemata Architects.

Created for Kolon Sport, an outdoor brand with sustainability at its core, the concept store is located in a commercial building on the island of Jeju. Jeju is South Korea's largest island and is renowned for its beach resorts and volcanic landscape.

Kolon Sport is known for upcycling clothing from its own inventory that would otherwise be thrown away.

Schemata Architects wanted the interior of its Jeju concept store to align with the brand's upcycling ethos and looked at ways in which it could incorporate recycled elements.

"We focused on the fact that 20,000 tons of marine debris is incinerated annually on the island of Jeju without any way to reuse it, leading to the destruction of the rich natural environment, and conducted an experiment to produce clothing brand fixtures out of marine debris," said the studio.

Stacked into puzzle-like arrangements, the discarded marine debris includes jerry cans and blocks of white polystyrene. Debris was also used to make hangers, shelves, and tables for the store.

For the interior itself, the architects wanted to make minimal interventions. The store's walls are a patchwork of peeling paint, exposed concrete, bricks and breeze blocks, while lighting is provided by simple strips of tube lights.

On the outside of the building, signage was limited to a simple logo and the uniform white storefront blends into the neighbouring buildings. 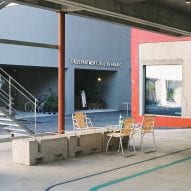 "This is an approach to urban development that we call 'invisible development'," said the architects. "At first glance, nothing seems to have changed from the outside, but once you get closer and enter the building, you can see how interesting it is. And it makes you wonder if there will be similar changes in the other building beyond."

The Kolon Sport space is a continuation of the studio's wider Arario Project – a community development project on Jeju that has seen the architects renovate several buildings – including a multipurpose store, restaurant, gallery and hotel – as part of the rejuvenation of the island's Tap-dong district.

"The Kolon Sport project was not limited to the renovation of a single commercial space as an upcycled brand, but aimed to break down the space's own territory and spread the value of that brand in stages in the town," explained the architects.

"The project was planned to protect the nature of Jeju island, to implement initiatives to expand environmental sustainability, and to become a hub of sustainability for the town."

This project has been shortlisted in the large retail interior category of Dezeen Awards 2022 alongisde a second hand book and clothing store in Shanghai that features display fixtures inspired by grocery stores and a reconfigurable sales showroom in Japan.

Photography is by Ju Yeon Lee.