London studio RA Projects has reconfigured and refurbished a house owned by fashion designer Roksanda Ilincic, adding a blue steel staircase in the centre designed to look "like a sculpture in a gallery" (+ slideshow).

Fin House was designed by RA Projects for Roksanda Ilincic and her husband Philip Bueno de Mesquita, a design entrepreneur who founded trainer brand Acupuncture in the 1990s – although the pair have since decided to sell rather than move in.

The couple bought the three-storey house in central London off-plan from a developer, but wanted to upgrade the surfaces and reconfigure the layout – particularly the 195-square-metre ground floor, which previously had a bedroom and en-suite bathroom on one side, and a central staircase enclosed in masonry.

All internal walls were removed to create one free-flowing space, and the staircase was enclosed in a blue steel fin-like structure.

"The strategy was to open up the floor and make the stairs a central sculptural element," explained architect Rashid Ali. 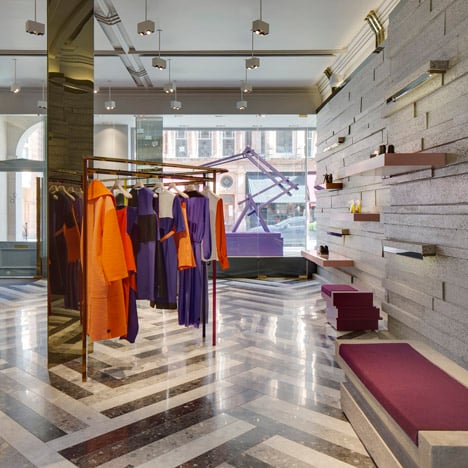 "The stairs sit between the kitchen and dining area on one side and the living space on the other side, providing a division, but with a degree of permeability," he told Dezeen. "It was important to be able to move around them, like a sculpture in a gallery."

The blue was taken from a tone of fabric by Danish brand Kvadrat, and also mirrors the aesthetic of Ilincic's designs, which are known for their bold use of colour. Ilincic even used the staircase as a backdrop for images showcasing her Resort 2016 collection.

"We were exploring the idea of lining some walls with Kvadrat fabric, and we decided to use the colour of one of these fabrics for the stairs. We spray-painted small steel samples until we had the best match," said Ali.

Ali previously worked with Ilincic when he was an architect at Adjaye Associates, where he helped design her former home, Lost House. Adjaye Associates also recently designed Ilincic's first London store, incorporating geometric elements from her designs into the interior.

On the basement level, the home has a master bedroom and bathroom, and a separate room used for dressing and storing clothes. A lightwell brings daylight down into the bedroom and doubles as a patio, and the dressing room receives light from four glass rectangles set into the floor of the kitchen area above.

On the top level, there are two more bedrooms and another bathroom. The fin-like structure of the blue staircase extends up to the first floor to visually link it with the ground floor, and also has shelves built into one side on the ground floor, near a study area, to provide space for books.

To fit the staircase into the existing opening of the previous stair, Ali had to model the design in 3D and have sections prefabricated, which were then positioned and welded in a tight space onsite.

"It was very difficult to insert a new design into the existing opening and meet building regulations," he said.

"It was also incredibly difficult to spray paint, because of the spatial constraints, and the fact that it was formed from so many different fragments and facets."

To reflect light from the south-facing terrace at the home's rear and create a neutral backdrop to emphasise the blue of the stairs, the architects used Altro Flexiflow resin flooring throughout the house.

The self-smoothing material has a flexible, stretchy quality, similar to vinyl flooring, and can be laid over cracked subfloors without fractures showing through on the surface.

Strip lights were added to the ceiling of the ground floor to accentuate the length of the space.

"It was really about formally working with and acknowledging the planes that form this space, and the linear quality of this space," said Ali.

The bathrooms were conceived as darker cave-like rooms, in contrast to the light, open-plan ground floor, and feature walls and floors finished in unglazed tiles by Dutch manufacturer Mosa.

The reconfiguration and refurbishment of Ilincic's home took 14 months to complete.

Other homes with colourful staircases include a Japanese house with red spiral stairs and an Australian home with a suspended yellow staircase that joins up with the kitchen island beneath it.