Huge steel beams with I-shaped profiles were stacked to form the framework of this Tokyo house by Mount Fuji Architects Studio, which features a red spiral staircase winding between its floors (+ slideshow).

Local firm Mount Fuji Architects Studio – whose past projects include a house centred around a tree-like column – designed Log Rhythm house as a home for a couple, in a modern residential development on the outskirts of the Japanese capital.

The design of the three-storey building is informed by the traditional methods of constructing azekura log cabins – an ancient building typology featuring walls made from lengths of rounded timber that intersect at the corners.

The architects reinterpreted this technique to suit the property's contemporary urban context by swapping the layered logs for industrial steel I-beams – also known as H-beams or universal beams.

The beams have a large section of 700 millimetres by 350 millimetres and are more typically used in major construction projects.

Here, they are stacked to form a monumental structure that is accentuated by the exposed profiles at the building's corners.

An alternating arrangement creates gaps between the top and bottom edges of the beams for bands of windows, which are frosted in areas where privacy is required.

Internally, their joints are smoothed off to soften the material's industrial quality.

"H-steel's material properties, such as enormous weight and strength, mathematical regularity and gentleness expressed in rounded corners were assembled into a log-house shape and intensified in an attempt to furnish a desirable locality to a featureless, newly-developed residential area," said architect Masahiro Harada.

The stacked beams are left exposed internally to evoke typical Japanese shinkabe wood-framed construction, which does not conceal the frame behind plasterwork and instead uses plaster to fill in spaces around the structure. 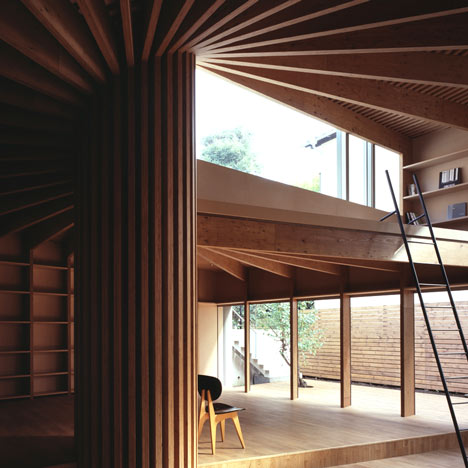 "My interest lies in the shinkabe (plastered walls with exposed timber pillars) rather than the okabe (walls where pillars are plastered over)," said Harada. "[Shinkabe] adds to the living environment the locality that well-constructed material things radiate, by exposing the architectural framework on its surface."

Within the living areas, the visible framework enhances the building's materiality and simple construction, with the beams forming integrated shelving and benches around the edges of the rooms.

The ground floor accommodates a bedroom with built-in storage and a bathroom housed in two rendered volumes on either side of the central corridor.

The spiralling metal staircase is positioned at the corner of the building and connects a reception area with the living and dining space on the first floor. A simple kitchen is located at the far end of this storey.

The stair ascends through a double-height void between the living room and the top floor, which is designated as a studio space.

Corrugated metal extends between the beams on either side of the building to support the floors. The underside forms a textured ceiling that adds to the utilitarian feel of the interior.

Photography is by Koji Fujii/Nacasa&Partners.