Canadian designer Julie Legault has developed a desktop biolab to make synthetic biology more accessible, allowing users to hack DNA at home and monitor the progress of their creations (+ movie).

Legault described the Amino kit – which was developed with the MIT Media Lab and has been successfully funded through Indiegogo – as "a bit like an Arduino for synthetic biology".

It comes as a square wooden box with a hinged plastic lid, similar to that on a record player. Amino contains everything required for users to undertake their own synthetic biology experiments at home – including bacteria, DNA, food, sensors and tools.

"The user experience is one thing I'm focusing on, to make it simple to do," Legault told Dezeen. "Then you can go in a bit further once you understand the basic concept. So at first it's like an Easy-Bake oven."

Currently the Amino kit comes complete with a non-dangerous strain of E. coli bacteria, which can be combined with synthetic firefly DNA to create a glowing living nightlight.

The bacteria, which arrives in a tube, is added to a petri dish and left for 12 hours to grow. The user then selects cells to be placed into a solution that makes the cell membranes porous.

The firefly DNA can then be added to the solution, before it is put on ice for 20 minutes and then heated – forcing the bacteria cells to take in the DNA as they repair themselves.

The cells are then chilled and fed, and moved to a new petri dish that contains an antibiotic. Only bacteria that have transformed and taken in DNA will survive.

Twelve hours later the petri dish should show colonies that can be selected and inserted into Amino's main tube, raised above the rest of the lab, which will then glow like a night light.

The Amino kit then functions like a living Tamagotchi – the Japanese electronic toy pet. Users monitor the bacteria's growth and consumption, making sure it is adequately fed to keep on surviving. 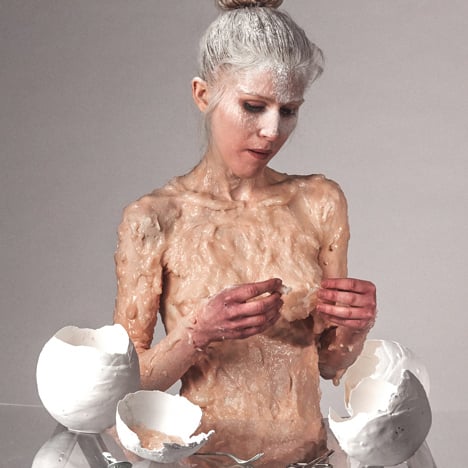 Although Legault intends to ship the first edition of Amino with just one bacteria option, she hopes to develop future kits that could allow users to develop their own yeast for baking bread, or even harvest their own DNA to be used.

The kit could also be adapted to create fragrances, flavours, materials, and even create medicine, such as insulin, at home.

Synthetic biology is increasingly fascinating designers, who have proposed using the field to do everything from replacing vaccinations with mushroom inhalers to modifying the human body so it can consume and digest rotten food.

"Synthetic biology and genetic engineering is going to be as big as electrical engineering was for the last century," Legault told Dezeen. "It's a new technology, scientists have got a good grip on it now and it's already affecting us in terms of food and medicine, and materials."

"For me it's important everyone has access to at least understand the basics – not everyone should become a scientist, but as an artist it's pretty cool to make your own living pigment, for example."

"With the whole GMO [genetically modified organisms] and medicine debate, it's important to have a hands-on experience instead of just reading the newspapers," she added.

Previously, designer Samuel Wilkinson created a Tamagotchi-like miniature garden that uses an accompanying smartphone or iPad app to control the water, climate and nutrients reaching the flowers inside the terrarium.