People appear to be dancing, jumping and skating behind the seemingly translucent facade of this public restroom, which has just been named Japanese Toilet of the Year (+ movie).

Designed by Tokyo-based Klein Dytham Architecture, Gallery TOTO is a public toilet inside Narita Airport, although it also functions as a showroom for Japanese bathroom brand TOTO.

It was recently awarded as best toilet in Japan by the ministry of land, infrastructure and transportation.

From the outside, the facility appears to have translucent walls that reveal the silhouettes of the toilet users behind.

But these are actually LED screens, playing prerecorded sequences that include dance parties and cleaning.

"We were interested in the notion of the most private place being in a most public place," explained architect and studio co-founder Mark Dytham, whose past projects include offices for Google and YouTube.

"We wanted to get away from the perception of toilets as closed and dark environments, where one can rarely see beyond the entrance area, and where one is only confronted with a series of terraced stalls," he told Dezeen.

The entire block is encased in clear glass and houses 10 individual toilet cubicles. 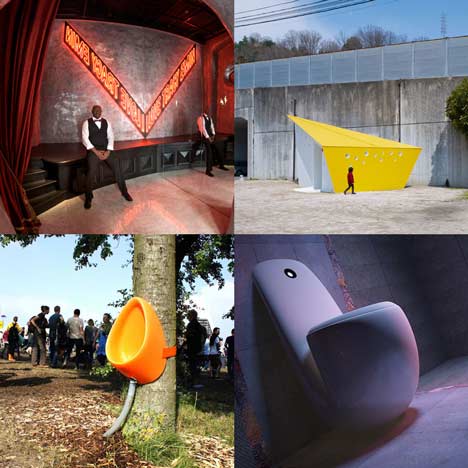 Behind the glass, six of the cubicles are fronted by one or two low-resolution LED panels, masked by fabric screens.

When films are played on the screens, it creates the illusion that toilet occupants are on show to everyone else in the airport terminal, when in fact they have complete privacy.

The effect is similar to the view through a traditional Japanese room divider.

"When not illuminated the wall looks just like a textile and is very soft, like a shoji screen," said Dytham.

"An LED panel would have given a hard, sharp image, but here the low-resolution digital image and tactile fabric provide an image that looks more like a soft shadow."

The architects worked with creative agency Black Bass and contemporary dance company Strange Kinoko to choreograph the 20-minute performance of "silhouetted happenings" in the toilets.

Each toilet is also fitted with an LED indicator strip showing how long the cubicle has been in use for, so that those waiting can see which one is likely to become free next. "The indicator is like a thermometer that can be seen from either side," said Dytham.

Inside, each cubicle is decorated with images of landscapes.

Gallery TOTO is located in the Sky Lounge, which connects Narita Terminal 2 to its satellite terminal. It forms part of a series of upgrades underway at the airport in preparation for the 2020 Olympic Games.