Terminal 3 at Taiwan Taoyuan International Airport will comprise a new terminal building, boarding gates, concourses and a multi-function building, along with transport infrastructure.

The competition jury was impressed with the "innovative planning and design" submitted by Rogers Stirk Harbour + Partners, which is working as part of a team that includes local firm Fei & Cheng Associates and engineers Arup.

It will be located between Terminal 2 and the China Airlines Headquarters at the airport, which is located 40 kilometres west of the capital Taipei and is the eleventh busiest in the world. 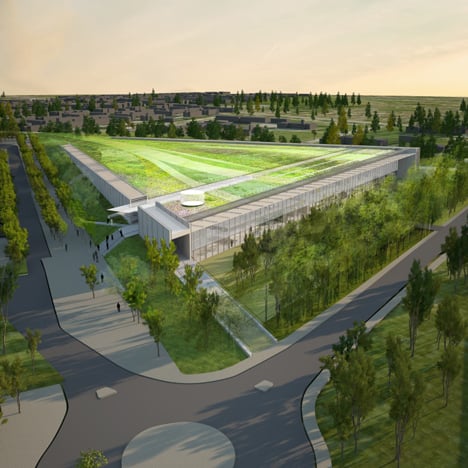 "We have designed two of the most recognisable airport terminal buildings in the world," says Richard Rogers in a movie showing the design. "What we have learned with almost 30 years of airport experience is that amongst all building typologies, the modern airport is most susceptible to change."

The design for Taoyuan Terminal 3 borrows elements from both of these previous projects. It combines the flexibility of Heathrow's single-span roof with the open interior spaces and undulating ceiling at Barajas.

Thousands of lamps suspended from the roof will create areas with higher and lower ceiling heights, which can be easily altered to accommodate future requirements.

The central building will be flanked by two long concourses housing passenger gates, connected by bridges spanning over roads that will run in between the structures.

"Our proposal is focussed on a passenger's experience with a deliberate strategy to absorb constant future change, whilst always retaining the integrity of its unique design," said Ivan Harbour in a statement. "The terminal will be designed to meet the highest sustainability criteria; holistic engineering and architecture."

Existing airport structures and additional new buildings on the approach to the terminal will eventually form an "aero city" around the transport hub.

Rogers' team won the second phase of the competition after the shortlist was announced in September 2015. They competed with Foster + Partners and a team led by Ben Van Berkel's UNStudio for the project, with each participant asked to submit a design before 26 October 2015.

The firm is best known for designs including the high-tech Lloyd's Building, the Cheesegrater skyscraper and the O2 arena in London. It was founded by Rogers after he completed the Centre Pompidou in Paris with Renzo Piano.