Architect Jeanne Gang has unveiled plans for a geologically-inspired extension to the American Museum of Natural History in New York (+ slideshow).

Located on the Upper West Side of Manhattan, Studio Gang's proposal for the Guilder Center for Science, Education, and Innovation calls for a 218,000-square-foot addition (20,252 square metres) to the American Museum of Natural History.

Curving forms created by structural concrete bands will bend from the inside out, and will be clad in stone on the exterior. The addition will also create a significant new entrance on Columbus Avenue at 79th Street.

The curving forms of Gang's extension are meant to evoke rock formations, according to the architects. 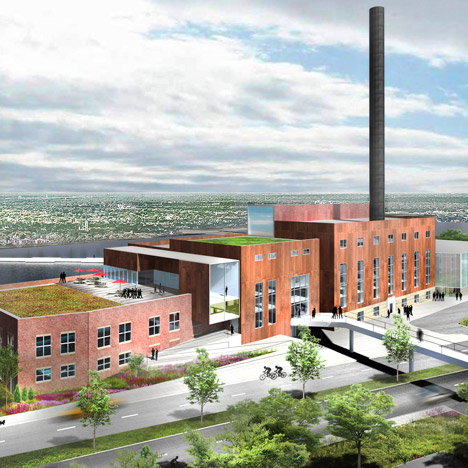 Inside, a series of bridges will connect the museum's many buildings, creating more than 30 links within the new addition. The curving interior walls will also create niches for the display of objects from the museum's collection.

The existing complex is a hodgepodge of buildings ranging from Victorian Gothic and Romanesque Revival to modern structures. Three buildings will be removed to create the new addition.

"We uncovered a way to vastly improve visitor circulation and museum functionality, while tapping into the desire for exploration and discovery that are emblematic of science and also part of being human," said Studio Gang founder Jeanne Gang.

"Upon entering the space, natural daylight from above and sightlines to various activities inside invite movement through the Central Exhibition Hall on a journey towards deeper understanding. The architectural design grew out of the museum’s mission," she added.

The project is expected to cost $325 million (£213 million), of which more than half has already been raised. The Museum of Natural History is one of the city's most popular institutions, drawing between three and five-million visitors per year.

The project is not without controversy, as the addition will consume about a quarter of an acre (.10 hectare) of public parkland.

The Chicago-based firm recently opened a New York office to handle their growning roster of work on the East Coast.

The firm is also currently working on the third largest tower in Chicago and the grounds of the Lucas Museum, also planned for the Windy City.