New Yorkers are speaking out against a rash of super-tall skinny skyscrapers by architects including SHoP and Robert AM Stern, which they say will overshadow Central Park.

Activists marched along 57th Street in midtown Manhattan on 8 November to draw attention to the controversial towers and the shadows they cast over the park – New York's main green space.

The protesters, who carried black umbrellas to symbolise the impact of the shadows, have dubbed their campaign Stand Against the Shadows.

According to the group, the thin towers cast shadows that stretch three-quarters of a mile (1.2 kilometres) into the park. They are darkening popular attractions such as historic carousels, playgrounds, baseball fields and portions of the Central Park Zoo.

"This is a problem that can't be ignored any longer," said campaign spokesperson Valerie Brown in an official statement.

"Developers are under no obligation to seek city or community approval or input, nor carry out any environmental studies, to build to these unprecedented heights," she added. "They only had to buy up the air rights, or in some cases, add empty floors to work around height limits."

Developers buy "air rights" from owners of shorter buildings, which enable the developers to add floors to new towers.

Several super-tall towers – most of which are residential, containing multi-million dollar apartments – are being constructed just south of Central Park on 57th Street, earning it the nickname Billionaire's Row.

Architect Steven Holl took issue with the towers in an Opinion piece for Dezeen, stating that "architecture with a sense of social purpose is becoming increasingly rare" in New York. 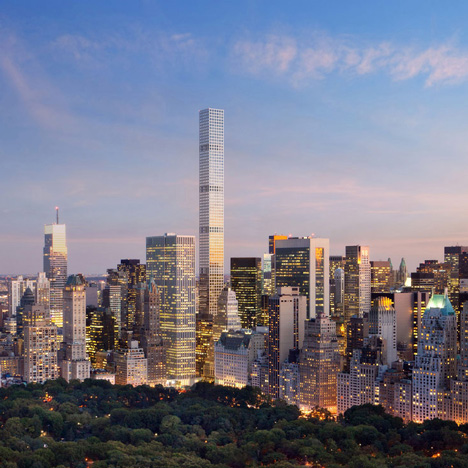 The Stand Against the Shadows group is calling for a temporary halt on development of towers higher than 600 feet (183 metres). It wants the city to conduct thorough environmental and infrastructure studies, improve zoning regulations in regards to building heights and setbacks, and solicit public input.

The recent demonstration was described as a "reboot" of a Stand Against the Shadow protest that took place in Manhattan in 1987 in response to the proposed height of the Columbus Circle Towers, which were to rise 58 and 68 storeys.

The earlier protest was led by the Municipal Art Society of New York (MAS), a prominent nonprofit organisation that also supported the recent march. In 2013, MAS issued a reported called the Accidental Skyline, in which it urged city officials to better engage the public in the urban planning process.

"As in 1987, today's demonstrators aren't against new development or skyscrapers themselves," said Mary Rowe, the organisation's executive vice president. "We are simply calling for the city to plan intentionally for the future, especially near treasured public spaces like Central Park."

The concern over the shadows has been discussed for years, and was examined by architecture critic Paul Goldberger in a 2014 Vanity Fair story. "Given the slenderness of the new towers, it might be more accurate to say that the southern end of the park is someday going to look striped," wrote Goldberger.

In addition to the long shadows, protesters are concerned that housing units within the super-tall skyscrapers will be left empty. "These luxury towers are often purchased as investment properties with no intention of ever being inhabited," said the group in a statement.

The city said it does not intend to halt the development of super-tall towers in midtown Manhattan, according to reports.

"Midtown Manhattan has always been a high-density/high-bulk area given its concentration of mass transit and its role as the city's premier business district," wrote the director of city planning, Carl Weisbrod, in a publicly released letter. "We have no immediate plans to reduce the current as-of-right density or bulk requirements."