Water and light-filled condoms that resemble oversized droplets hung over the heads of visitors to this London installation by Spanish studio Luz Interruptus.

The designers created the Rain Interactive installation for the Waterman Arts Centre in Brentford, west of London.

"We wanted to highlight the vital need of water and how abhorrent it is to privatise it and trade it for the profit of just a few," said the designers.

To construct the piece, the team used 3,000 extra-large and extra-strength condoms that were filled with blue-dyed water. A small autonomous light was added to each of the drops, allowing them to glow from within. 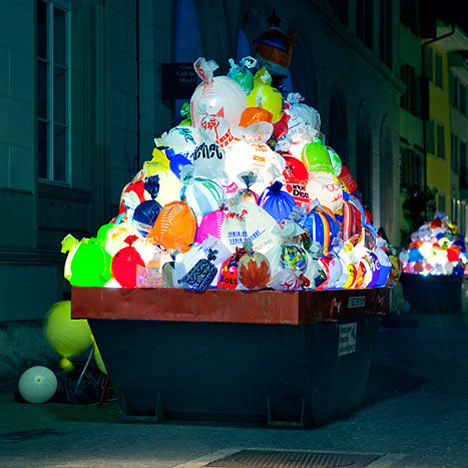 "We thought this was being conceptually appropriate, as condoms are designed to preserve in them the true source of life," said the designers, who previously floated hundreds of inflated and illuminated latex gloves on a French lake.

The droplets were hung at varying heights from a cube-shaped framework in the entrance of the arts centre.

Employees of the centre, as well as visitors of all ages, were given the opportunity to assist Luz Interruptus by helping to add raindrops to the installation.

The designers compared the giant raindrops to "the shape and touch of silicone breasts" and said they were "pleasant to touch and squeeze". 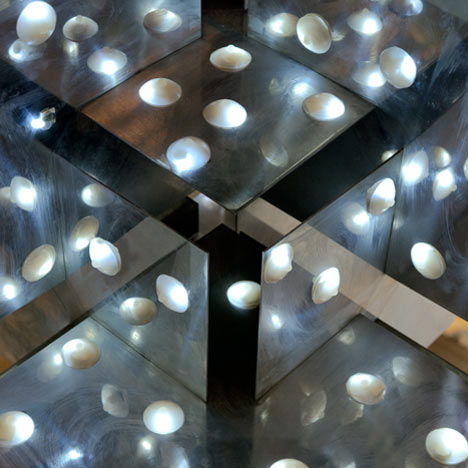 "One could dive in and caress the elements while listening to the gentle sound of the water as it moved," they added.

The piece continues the studio's work with light, which has seen them install thousands of glowing books in Melbourne, and use plastic carrier bags as lamps that were used to fill rubbish skips in Switzerland.

In a more mischievous piece, the studio added hundreds of illuminated silicone nipples to statues outside the Public Art Museum in Madrid.

The Rain Interactive piece was created for the Waterman Arts Centre in London, as part of the Totally Thames festival, and was on display from 18 to 20 September.

Photography is by Lola Martínez.