Swiss architect Omar Trinca has added a concrete extension to a 19th-century villa in Geneva, creating more space for the kindergarten that now occupies it (+ slideshow).

Le Gazouillis kindergarten is situated on the edge of the Swiss city's Geisendorf Park. It occupies a villa built in 1877, which was converted for its current use in 1941.

Omar Trinca's Lausanne-based studio renovated the existing villa, which provides facilities for babies up to two years old, and designed the extension to accommodate children from the ages of three to six.

The two-storey addition adjoins the villa on its western side and extends along the adjacent street. 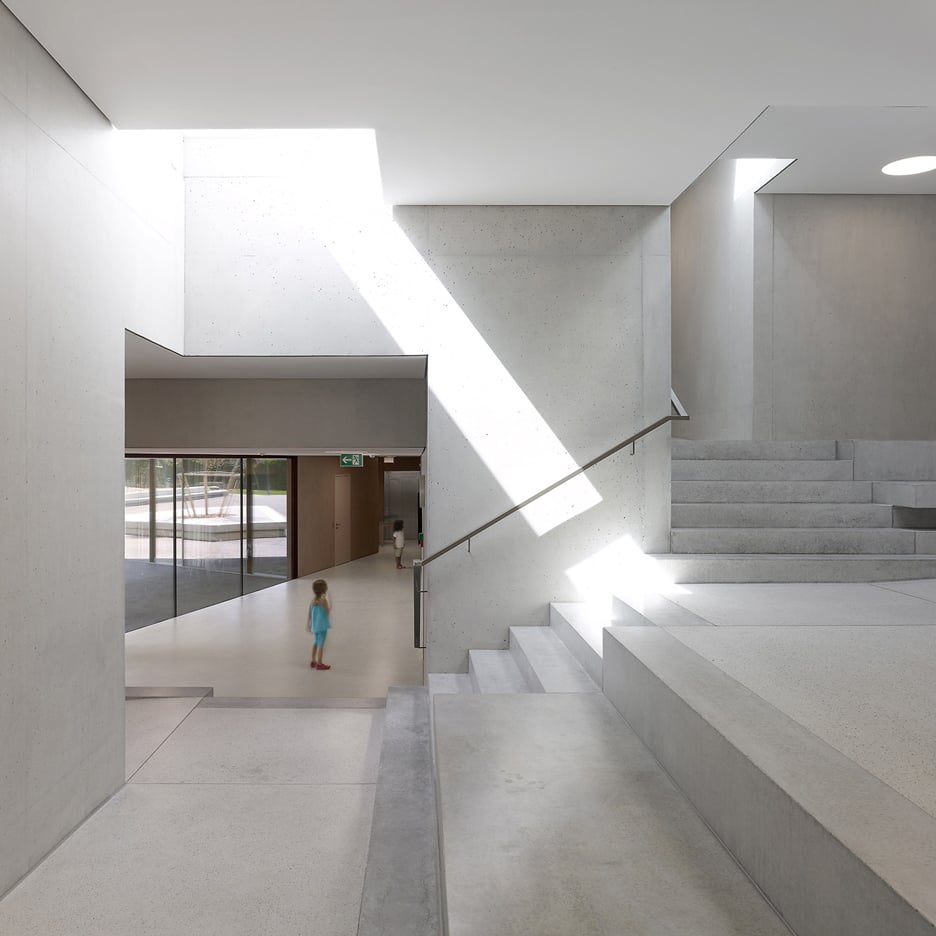 At the front, its facade directs visitors towards a central entrance and a public plaza, while the rear section borders a private garden.

The extension's form responds to the topography of the site and the position of existing trees, as well as the villa.

"The main objective of the project was to create a volume with a shape able to enhance the villa through a balanced volumetric relationship between the two without any significant hierarchy," Trinca told Dezeen.

The extension is set back slightly from the villa's frontage. A single-storey section between the buildings houses a new entrance that connects the plaza with the park behind.

The smooth surfaces of the monolithic concrete form offer a contemporary counterpoint to the villa's rendered exterior. But recessed windows with simple frames also reference the existing building.

"A very important aspect of this project was to create a coherent and harmonious unity dialoging with the city, its buildings and its nature while preserving the spirit of the place," Trinca added.

"The uniform concrete monolith and the villa made in stone are unified through their common mineral building material, stone for the villa and concrete for the extension."

The rear portion of the building stretches out into the park. It accommodates a large multipurpose room on the ground floor, with a corner window looking out onto the green surroundings.

Smooth concrete surfaces feature throughout the interior, reinforcing the building's robust, monolithic exterior. Windows are framed with timber, while walls and ceilings are painted white to brighten the rooms.

Exposed concrete was also used to create a cross-shaped kindergarten in the Swiss town of Pringins, while a nursery recently completed in Japan is designed around a courtyard garden.

Photography is by Thomas Jantscher.