The new studio was created for designers working on the company's Clarks Originals line. It is located within a factory that was part of Clarks' first industrial site in Somerset, England, created in 1825 – something the team were keen to reflect in their design.

"The modern factory within the office embodies our reinterpretation of the historical C&J Clarks surrounding buildings striking features, including triangular roof tops of the old shoe factory and the shape of the central brick chimney," said ARRO Studio. "The volume encompasses the director's office, a storage room and a large meeting room."

While the director's office is enclosed within white walls, the meeting and storage rooms are both completely visible through glazed panels and glass sliding doors. 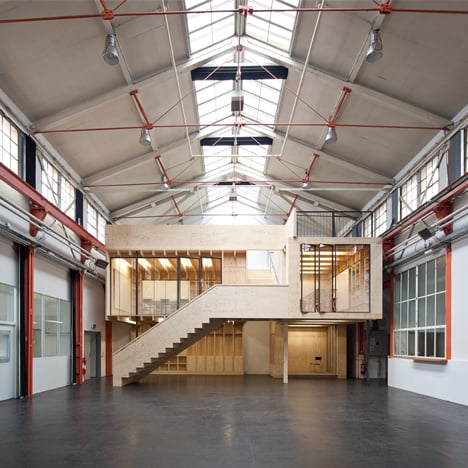 Other office interiors that feature meeting rooms in glazed volumes include a the headquarters of a children's clothing manufacturer in Estonia, and a shared working space inside a Basel machine factory.

In the centre of the space, ARRO installed an eight-metre-long wooden table that is built around the existing metal columns.

Cork partitions suspended from the ceiling beams slide and rotate – enabling employees to create workspaces depending on their needs.

"The main idea for this workplace is to encourage creativity and optimise exchanges between the designers, developers and product managers while addressing the challenges and respecting the flow of the footwear design process," the architects said.

Integrated storage systems were added throughout the office, including under-seat spaces and wall of gridded shelves constructed from sheets of pine.

A "shoe wall" is used to display footwear designs, and features handles that open and turn the wall into a giant closet.

A lampshade made from draped pieces of leather hide hangs above a lounge and kitchen area, which is located opposite the leather storage facility.

Clarks was founded in 1825 by brothers Cyrus and James Clark in Somerset, England. The brand's most recognisable products include the Desert Boot – an ankle-high boot with crepe sole – and the moccasin-inspired Wallabee shoe.