KAMP Arhitektid has installed angular wooden rooms and five metre-high trees inside a former factory in Estonia, to create an office modelled on a "bright summer forest".

Tallinn-based KAMP Arhitektid – whose previous projects include a timber house that curves around an oak tree – was briefed with transforming the large room into smaller zones. The team responded by installing a wooden volume broken up into separate meeting rooms and workspaces.

"Our plan was to create a unique landscape that would differ from the old room both in form and materials used," said architect Jan Skolimowski. 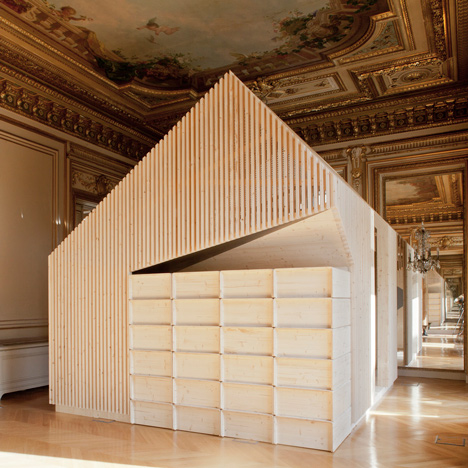 Wooden meeting rooms by Estelle Vincent include seating, lockers and a slide

"The whole landscape was designed to be multi-levelled, with sharp facets," he added. "We wanted it to be exiting to move around with various behind-the-corner stairs, doors and rooms."

The realistic-looking trees peppered around the space are made from a combination of real trunks and artificial branches and leaves. They reach up towards the roof beams.

"A week after the trees were crafted a small real fresh branch with little leaves started growing on one of the trunks as if to add to the visitors' confusion," said Skolimowski. "We have created a room that regardless of the season outside makes you feel as in a bright summer forest – even if the birches and maples are not real."

Although the existing building already had 4.5-metre-high windows, skylights were also added to maximise the amount of natural light in the space.

"Lighting played an important role," said Skolimowski."There are high windows on two walls that were once meant to light the manufacturing processes in the factory, but today they are really important design elements which provide plenty of natural light that is often scarce in modern optimised offices."

Functional furniture was chosen to avoid creating a clash between the fittings and the design of the wooden volume.

In the kitchen, bespoke house-shaped wooden cupboards feature cut-outs in the shape of children in overalls, which take the place of handles.

Foliage is increasingly being used as design features in buildings, particularly in Japan where examples include a fashion showroom with indoor rockeries in Kobe, and a cafe with a small tree growing inside it.

Photography is by Terje Ugandi.