New York studio Apparatus has unveiled a marble lantern and vessel that embody "the visual language of ceremonial objects" (+ slideshow).

The Neo Marble line features a lamp in three sizes and a large bowl, all crafted from Italian marble – a material that has "historically signified strength and permanence".

"Materials study drives our design ethos as a studio and we have found an opportunity to work with an incredible quarry in Italy," said the studio's creative director, Gabriel Hendifar. 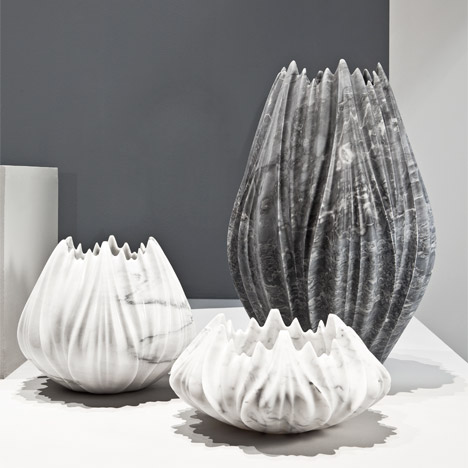 "Our aim was to connect with the timelessness of marble and create objects that feel somehow boiled down to their most essential elements."

The Neo lantern features a glass orb that sits atop a conical base made of marble. A thin strip of machined brass wraps the top of the base. A single candle within the sandblasted glass sphere emits a soft glow.

The lamp is available in white or black marble and comes in three sizes.

The Neo vessel is composed of a solid brass bowl set within an urn-like marble base. The footed bowl can be removed from the urn and stand on its own.

"Working at the nexus of primitive utility and ancient ritual, Neo Marble distills the visual language of ceremonial objects to their simplest forms," the studio said.

"The commanding proportions of the collection draw inspiration from structural relics and antiquities, continuing the studio's investigation of material and narrative, balance and proportion."

Launched in 2012 by Hendifar and communications specialist Jeremy Anderson, Apparatus is known for creating modern lighting and furniture with a vintage feel.

During the 2015 New York Design Week in May, Apparatus unveiled two new lines of lighting fixtures, along with a table that marked the studio's foray into furniture design. Apparatus is one of the many studios that make up the "exploding" lighting scene in New York.