The London and Liverpool-based studio was tasked with creating a mobile micro-green space that could replace two car parking spaces, and raise awareness of pollution in London. 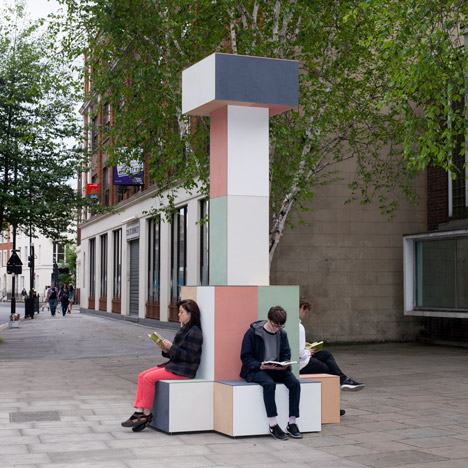 Installed on Tooley Street, near London Bridge, the "parklet" features a zigzagging bench built using scaffolding boards. The wood has been left untreated to allow for natural weathering.

The sides of each board are painted bright red to create flashes of colour, and create a "vibrant, shifting vertical pattern" when seen closer up.

"We approached the brief by creating a singular sculptural seating element around which zones of planting and pockets of space could occur and overlap," said WMB Studio, which previously converted a lifeguard outpost on Toronto's waterfront into a set of bright red swings.

Geometric galvanised steel plant pots slot into the spaces created by the bench, and are designed to be re-used singularly or in a number of linked configurations.

"The resulting interwoven sequence of seating and planting provides a buffer zone to the busy road, and creates an organic extension of the pavement to encourage chance meetings and interactions," the studio added.

The bench and planter sections have been constructed to be adaptable to a variety of different locations, and can be scaled up or down depending on the space available.

An on-site air quality monitor sends data back to an app and website, and is part of Kings College London's network of data collection points.

The parklet opened on 20 November 2015 and is the first project to be delivered as part of Transport for London's Future Streets Incubator fund – which has committed £1.8 million towards improving public spaces in the capital.

The Tooley Street mini park will remain in place for a year, and three further Fresh Air Squares will be added to the London Bridge area across the next year.

Photography is by Ed Butler and Mickey Lee.