Tokyo studio Naf Architect & Design designed this house in Niigata to fit around a narrow driveway, which doubles as a space for outdoor get-togethers during the neighbourhood's annual lantern festival (+ slideshow).

Rather than placing a yard at the front of the house, studio co-founders Akio Nakasa and Teppei Amano, designed the house to site lengthwise on the plot.

This allowed them to create a sheltered parking space under the building and a private driveway alongside.

A wide opening for a garage is located nearest to the road, while a second more pedestrian-friendly entrance is situated at the back of the site. 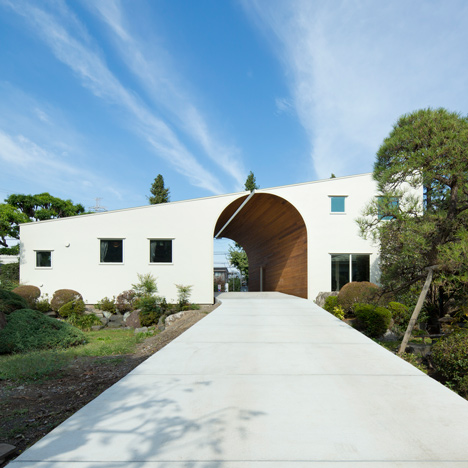 The building's white facade gently curves around to enclose the back of the driveway, making this main entrance visible from the road.

"The private road is paved with asphalt as if it is a continuation of a public road, although being actually a front yard of the house," explained Nakasa, who together with Amano previously designed a pair of houses separated by a tunnel-shaped opening.

"This private road would be a place exclusive for the owner to stand chatting with neighbours and for children to draw with chalks without minding traffic, or parking for guests," he added.

The house is set in an old neighbourhood of Niigata, a city in the centre of Japan's western coastline, which hosts a lantern festival each summer.

The pitched roof has concave slopes, mimicking the firm's design for a house in Saitama that looks like it has been split in half and a pair of homes in Kanagawa that give a family more privacy.

"When the date of festival comes near, neighbours get together on the street to discuss repairing lanterns and other matters, sometimes ending up on drinking party," said Nakasa.

"Habitants of this district have been using streets as part of living space, and the idea of a 'private road' takes on this tradition."

"When a car enthusiast friend visits by car, the owner can go out from garage, usher the car inside and start car talks," he added.

A flight of white stairs lead to the upper floor, where a sunroom, two bedrooms and a bathroom, bedroom sit below the curving roof.

Panes of glass set between the ceiling and the tops of the white walls allow light to filter from the sunroom into the bathroom.

"In Niigata, a region of much rain and less sunshine, people tend to spend time indoors, and the sunroom serves as open quasi-outdoor space under the high, big roof," explained the architect.

"It is a sunny space where laundry is hung to dry, children play or it serves for other purposes."

Photography is by Makoto Yoshida and Toshiyuki Yano.