An arched tunnel is formed between these two houses located beside a Japanese tea garden near Tokyo (+ slideshow).

Akio Nakasa of Japanese firm Naf Architect & Design designed the two residences to house three generations of one family. The first property accommodates a single grandmother, while the second is the home of a couple and their child.

Named Arch Wall House, the structure was conceived as two separate buildings that appear as halves of a whole. Despite being different in size and height, they line up with one another to create the central arch.

"The edges of the curved exterior walls stretching from both sides of the slope [roof] are slightly apart, making the buildings separate from a legal perspective," explained Nakasa. 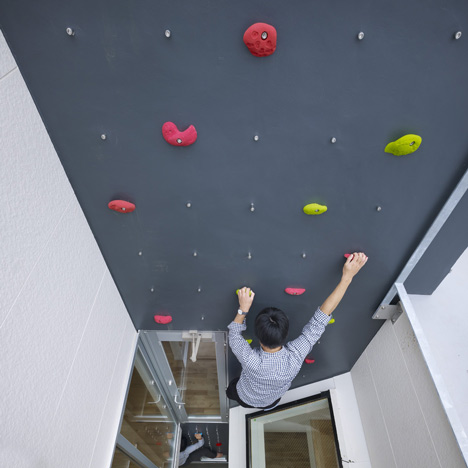 "However, these buildings, while they are independent, stand face to face and side by side to share everyday life and space."

The architect – whose past projects include a house with a climbing wall and ladders, and a residence that looks like it's been chopped in two – designed the buildings for a site that is also home to a traditional Japanese tea garden and two small shrines, in Hachiouji, west of Tokyo.

The site is sandwiched between two roads, and the tunnel provides an access road connecting them. Entrances to both of the residences are also located beneath the shelter of the arch.

"As cars are the principal means of transportation, the slope in between the buildings serves as a driveway for daily convenience," said Nakasa.

The first of the two houses is single-storey, making it more suitable for an elderly resident, while the other contains two storeys, allowing enough room for a growing family.

There are no windows on the north side of either building to prevent disturbances from the busy main road, but both feature a small top-lit courtyard with a decked surface and glazed sides, helping to bring in extra natural light.

"Daylight from the skylights is reflected on ceramic tiles on the curved walls to give different effects by the time and weather," stated the architect. "When sunny, it is sharp, when cloudy, it is soft, and in the morning and evening, pale violet blue light spreads inside."

Glazing was also added throughout the interiors, providing both clerestory windows and see-through walls.

This is most prevalent in a double-height living room that forms the centre of the family house, and which is positioned beside a glazed music room.

Herringbone-patterned flooring was added to offer some decoration to the otherwise minimally furnished space.

Storage areas for both residences have been creating by building cupboards into the angled inside wall.