Fala Atelier was asked to convert an out-dated shoe shop next to the city's Bolhão market hall to create the womenswear boutique.

The interior was last refurbished in the 1980s and many of the old fittings needed to be stripped away to create a neutral backdrop.

But a tight budget of less than €6,000 (£4,350) and a timescale of just two months left little margin for imagination, according to the team.

"Many years of small renovations and additions made the store both fragmented and unpleasing, and none of the existing fittings or furniture seemed fit to be reused," said the architects. "The space was quite long, with virtually no storefront and little natural light." 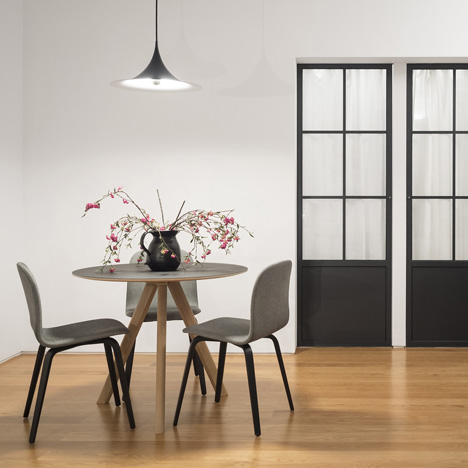 Walls and ceilings received a fresh coat of white paint, and grey tilework was replaced with seamless white flooring.

"We proposed reducing the space to its bare minimum complexity," added the team.

"Using only white planes, the old identity of the store was erased, allowing for a non-referential canvas to be defined. The 'new' inner volume was almost not designed, becoming just the result of an abstraction."

Brightly coloured garments contrast the white surfaces. They hang from slightly tarnished metal frames – a relic from the basement of the old shop. The modular system by Dexion can be adjusted as the stock changes.

"The old and rusty metal pieces expressed a strong contrast both with the colourful clothes and the white walls," said the architects.

Near the shopfront, a counter built from slabs of pale grey marble is intended to elevate the simple materials used elsewhere in the project. "Contrasting with the modesty of the intervention, a vague sense of status was conveyed," said the studio.

A single mirror leans against the wall by the marble counter, which sits in between the front and rear sections of the store.

Bright yellow curtains draw attention to the larger space to the rear. The tall drapes cover the entrances to three small fitting rooms and add an accent of colour to the otherwise stark space.

Fala Atelier, which was founded by Filipe Magalhães, Ana Luisa Soares and Ahmed Belkhodja in 2013, also recently completed a similarly pared-back space for a nearby estate agents, where marble partitions are used to define workspaces.

Photography is by Flávio Pires.