Heatherwick Studio has unveiled plans for a vast tree-covered development beside Shanghai's art district, which will feature a large wedge-shaped block modelled on a mountain.

The British firm led by designer Thomas Heatherwick was commissioned to design the Moganshan project for a six-hectare plot next to Shanghai's contemporary art district.

The 300,000-square-metre mixed-used development gains its name from this area of the city, which is known as 50 Moganshan Road (M50). It will include housing and offices as well as shops, hotel rooms and a school. 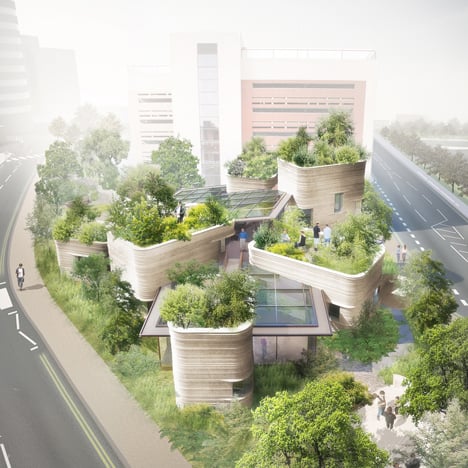 Blocks of varying height will create a staggered roofline with 400 terraces and 1,000 plant-topped columns. The tallest blocks will form the tip of a large wedge-shaped block at one end of the site.

"Conceived not as a building but as a piece of topography, the design takes the form of two tree-covered mountains, populated by approximately one thousand structural columns," said the studio, which unveiled plans for a new Google headquarters earlier this year in collaboration with BIG.

"Instead of being hidden behind the facade, the columns are the defining feature of the design, emerging from the building to support plants and trees," it added.

The development will be split across two plots that are separated by a narrow strip of government-owned land, and positioned between a park and a river.

Several historic buildings will be incorporated into the complex, and it will be flanked by high-rise towers on three sides.

Heatherwick Studio has also recently been granted planning permission to convert a Victorian coal yard in London's King's Cross into a canal-side shopping centre and is working on a Maggie's Centre for cancer treatment based on plant pots.