The renovation and extension of the brick toll house, which was originally erected in 1836, provides its owners with new living areas and work rooms, interspersed with a variety of outdoor spaces including patios and walled gardens.

Named Villa Tolhuis, the project was overseen by Rotterdam-based Bekkering Adams in close collaboration with the clients – a couple who run a local business specialising in small renovations and home improvements. The owners then completed the building work themselves.

"For us this is a special project not just because it is developed in close dialogue with the owners, but also because it has been fully executed by them," said the architects.

"This gave us the possibility to develop each detail in the best way possible to tell the story of a programme where old and new are interwoven using exceptional materials, shaped in a sculptural way."

Prior to the conversion, the toll house had been hidden behind a cluster of modern annexes and garden walls. The majority of these were removed to make way for the extension that unites the house's functions in a single cohesive structure. 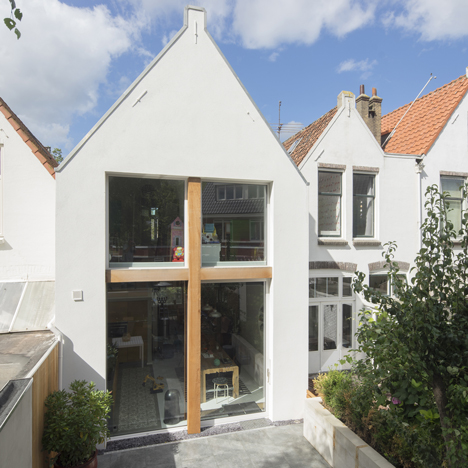 The extension adjoins the existing building but allows it to remain as the prominent feature on the street. Dark bricks imported from England clad the facades of the new addition, creating a contrast with the toll house's traditional red brick walls.

"The brickwork folds itself fully three-dimensionally around the contour of the house, thus giving the building a solid sculptured appearance," the architects added.

In-situ concrete used for the new structure is carefully detailed to ensure the various exposed surfaces throughout the building express the character of the formwork and the material's inherent texture.

A corridor that extends along the street-facing side of the house connects the various rooms and provides a buffer to prevent traffic noise from reaching the rest of the interior.

The living room, kitchen, studio, patio, workshop and storage room are all arranged along this circulation area, offering a series of distinct spaces with unique dimensions and characteristics.

Glazed walls and sliding doors connect several of these spaces with the gardens and courtyards, so there is a constant interplay between indoors and outdoors. This connection with the exterior is enhanced by the integration of skylights and strip windows.

"The outdoor area is part of the design, and inside the house nature is felt and sensed everywhere," said the project team.

"Small enclosed gardens and patios, low windows or strategic roof lights catch the daylight and project it onto the walls. Together they strengthen the feeling of a house as a green oasis behind the long garden wall."

Rainwater is channeled into a pond at one end the living room, from which it can be drawn for use in the property's grey water circuit.

The sculptural concrete wall between the corridor and living room allows natural light to filter between the spaces, and permits partial views of the gardens on either side of the house.

The toll house building contains an atelier on the ground floor, with a bedroom and bathroom above connected to the kitchen in the adjacent new structure. A large studio accommodated on the opposite side of a narrow patio from the living room can also be used as a gallery space.