The film contains thousands of tiny parallel lines that split the light into different wavelengths, creating a surface that diffracts it into multiple colours. When turned on, the bulbs create rainbow-coloured visual echoes of themselves. 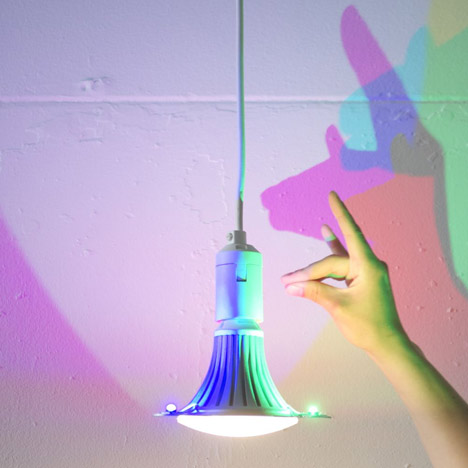 "I've always loved fluorescent lights, they are designed to be really utilitarian but they often use really graphic beautiful shapes," said Harding, who has also designed a balloon-like chair.

"I was interested in creating a new kind of lamp, one that would make us look at fluorescent lighting in a new way," she told Dezeen.

"I think it's very interesting that fluorescent lights are a little bit of an endangered species," said Harding.

"They are very dominant at the moment but they are slowly being replaced by more efficient LED technologies," she explained. "I imagine that in the future we might become nostalgic about these simple fluorescent shapes, in a similar way to how we still cherish incandescent bulbs."

Traditional bulbs are increasingly being phased out in favour of more energy-efficient LEDs, with recent advances in technology improving the quality of light they can emit.

French designer Philippe Starck told Dezeen that the advent of LEDs meant designers were "obliged to redesign all lights".

Harding's Wonderfluoro series includes a range of contrasting configurations, with bulbs arranged parallel to one another as well as in cross shapes and bent into circles.

"These lamps are intended to be used as wall lamps in domestic or commercial settings," said Harding. "They have a very simple construction with just one twist, the diffraction glass. I think that the nature of this effect also lends itself to larger lighting installations."

Dutch designer Dennis Parren also created a range of lamps that similarly split their own light to cast cyan, magenta and yellow shadows onto surrounding surfaces.

The Wonderfluoro lights were exhibited at Aram Gallery's Extra Ordinary show, which ran from 22 July to 22 August 2015, and also at the Matter of Stuff show at The Hospital Club, which was open from 23 to 27 September 2015.