Design Haus Liberty has converted a building with an triangular footprint in London's Shoreditch into rental apartments that fold around awkwardly shaped internal walls (+ slideshow).

The property occupies a site on a side street, and a shop occupies its ground floor. A developer asked London-based Design Haus Liberty to refurbish the spaces above to create three flats.

The building's unusual shape, and the layout of the floors and circulation meant that the project team had to come up with inventive ways to make the most of the available space. 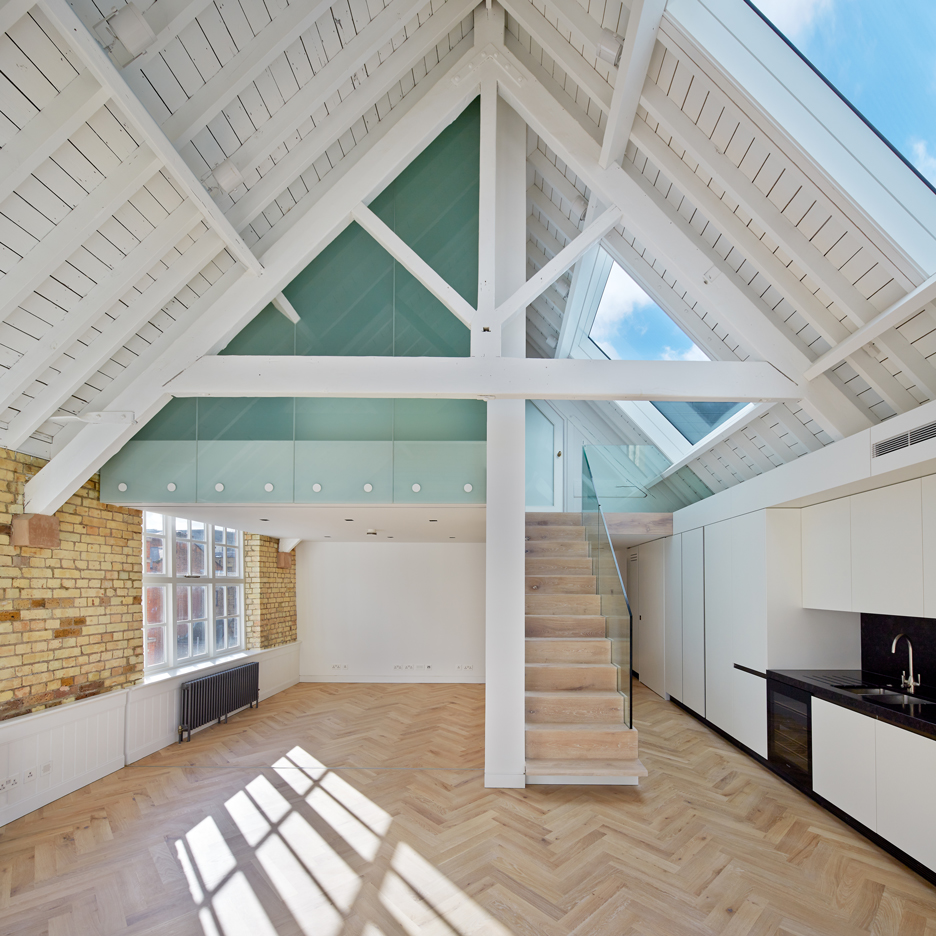 Two identical flats are situated on the first and second floors, with the newly created top floor accommodating a mezzanine apartment. This prompted the name Origami House.

The building's location in a conservation area meant that planning consent needed to be procured to restore the exterior and reinstate windows that had been blocked up.

"Taking inspiration from the ancient Japanese art of origami, the Origami House treats the irregularities of the site as opportunities rather than constraints," said Design Haus Liberty founder Dara Huang.

"Similar to how origami pays attention to each fold and crease on the paper, the form and layout of the Origami House pays attention to the triangular floor plate and structure of the former building and folds to create unique spatial and visual connections for its inhabitants," she added.

Throughout the flats, the angled walls create interesting effects of light and shadow. Practical uses have been found for some of the irregular spaces, including squeezing kitchens and seating areas into them.

The apartment occupying the upper floor features a bedroom on the mezzanine level, which is slotted into the space below the pitched roof. Large windows overlook the living area and allow daylight entering through skylights to brighten the spaces below.

Huang chose a minimal palette of robust materials that are appropriate to the rental market, helping keep the budget down to between £65 to £75 per square foot.

Kitchens contracted from fitted-kitchen firm Howdens and Ikea furniture are complemented by industrial details including metal pendant lamps and exposed bulbs in the wall-mounted light fittings.

"For the user, the Origami House becomes an architectural adventure signified by folding surfaces and refined details throughout," Huang concluded.

The project also involved the redevelopment of the retail unit, which is currently let to a convenience store. A new dedicated side entrance created for the residences is positioned behind a minimal black gate set into the brick boundary wall.

Design Haus Liberty's previous projects include a group of stripped-back apartments featuring industrial and off-the-shelf materials, and a loft-like office in a former warehouse with an installation made from reclaimed bottles.