David Chipperfield Architects has unveiled plans to refurbish a 19th-century brewery in Berlin, adding a trio of new buildings to house a gallery, restaurants and a medical innovation centre (+ slideshow).

The former Bötzow Brewery near Berlin's Alexanderplatz was severely bomb-damaged during the second world war but never rebuilt. Chipperfield's Berlin office is working on a masterplan to repair the surviving industrial buildings on the 24,000-square-metre site and to add three new volumes.

The buildings will surround a large public plaza in the centre of the site, which will reinstate access to the refurbished brewery and its beer garden.

"From its very beginning more than 150 years ago, the Bötzow family attached great importance to running a modern brewery and a pleasant working environment," said the studio.

"The architecture of the site always reflected these values, incorporating a public beer garden next to industrial buildings which formed a central square."

The new buildings have arched openings that reference the historic vaults that form the foundations for the site.

The original vaults will be exposed across the basement of the buildings and towards the street, which will be are linked with the plaza and beer garden by broad flights of steps.

"The natural topography of the sloping site creates a charming and inviting spatial sequence from the street through the beer garden up to the square," said the architects.

Bötzow Brewery first opened in 1885 and continued production until 1949, despite damage to the premises. Since its closure the site has been used to host club nights, parties and exhibitions as well as film shoots. 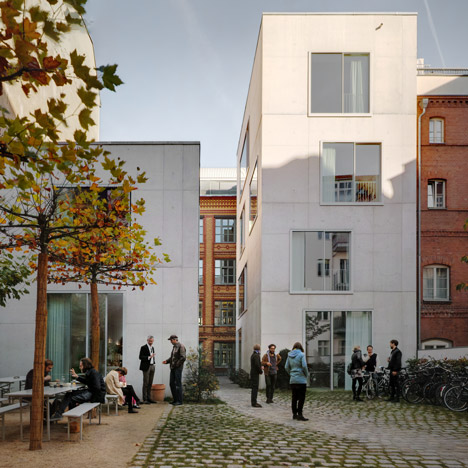 Client Hans Georg Näder bought the bought the site in 2010 and is reportedly investing €250 million (£185 million) in its redevelopment.

Näder is the owner of medical technology company Ottobock and will open the Future Lab innovation centre on the brewery grounds, creating the prosthetics company's second location in the city.

The site will also host restaurants, a boutique hotel, a swimming pool and an art gallery alongside a 200-space underground car park.

The foundation stone for the new development was laid 2013 and work is set to complete in 2019.

The Bötzow Brewery masterplan is the latest in a string of cultural projects by David Chipperfield Architects in Berlin, including the restoration of the Neues Museum with Julian Harrap Architects in 2009, which won the 2011 Mies van der Rohe award.

The firm is also in the process of refurbishing Mies van der Rohe's Neue Nationalgalerie. The glass and steel building, which hosts a collection of 20th century European painting and sculpture, will be closed for several years while work takes place.