Apartment Nana is located on the first floor of a residential block built in the late 19th century. For its renovation, the Lisbon-based studio aimed to restore the building's original features but to also offer a contemporary aesthetic.

"The conservation of some of the original finishings and decorative features were not only among the characteristics that the client sought but are also those that best define this home's identity," said architect Rita Aguiar Rodrigues. 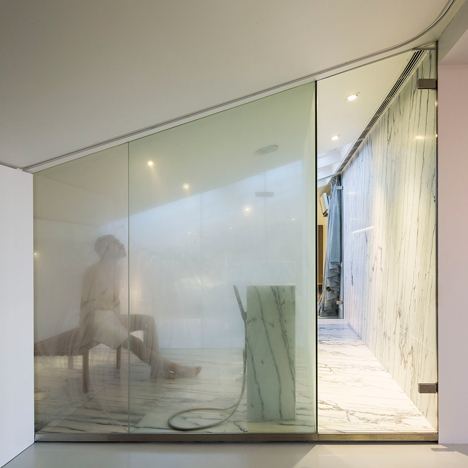 "The project correspondingly incorporated the desire to restore, conserve and enhance these same characteristics."

Original wooden flooring throughout the apartment was restored – with the exception of the kitchen where it needed to be replaced.

Although the majority of the property's existing layout was left intact, two bathrooms were adapted in order to create an en suite for the master bedroom and a larger washroom for the remainder of the house.

"The spatial layout of the apartment broadly corresponded to the needs of the client," said Rodrigues.

"The bathrooms, with misaligned layouts and means of access, were subject to profound intervention and were both structurally redesigned with a particular emphasis on the built features."

Monochrome and peach-coloured Portuguese marble – similar in colour to a decorative Zurich urinal completed last year – was used to create sinks, shower cubicles and splash backs in the two bathrooms.

These two bathrooms, the master bedroom and the kitchen are all located on the west side of the apartment, while the living space, study, dining room and second bedroom run along the eastern side.

There are also three additional side-by-side rooms in the middle of the home, featuring built-in storage cupboards that reach from floor to ceiling.

"These inner rooms and their respective contents were conceived and designed so as to be able to remain permanently open – interacting with the areas contained in the east and the west of the apartment and creating a visual and spatial relationship between these areas," Rodrigues said.

Other apartment renovations in the Portuguese capital include a top-floor property with a sauna built into its sloping ceiling, and a small flat complete with with sliding glass doors.