Architect Terry Farrell has spoken out against Renzo Piano's 72-storey skyscraper proposed for London's Paddington and has drawn up a rival scheme.

In a letter to Westminster council, Paddington-based Farrell, 77, described Piano's £1 billion super-tall development as a "piecemeal, opportunistic scheme" that does not address the need for wider regeneration around one of London's major stations.

Farrell – who has designed Shenzhen's tallest skyscraper and a 560-metre tower for China's Shandong Province – has now revealed his own plans for a high-density but mid-rise scheme for the same site.

"The potential opportunity to plan more widely for Paddington Station area is considerable and needs to be addressed in a much more comprehensive way," said Farrell in the letter.

"The proposals have no masterplan of convincing thoughtfulness and, consequently, they are too piecemeal and opportunistic."

"This is a sensitive location, next to conservation areas and historic buildings, and to a very significant Royal Park," he continued. "So the first route to explore must be a lower rise answer and the very last route that is acceptable is to pursue a super tower of 72 storeys in my view." 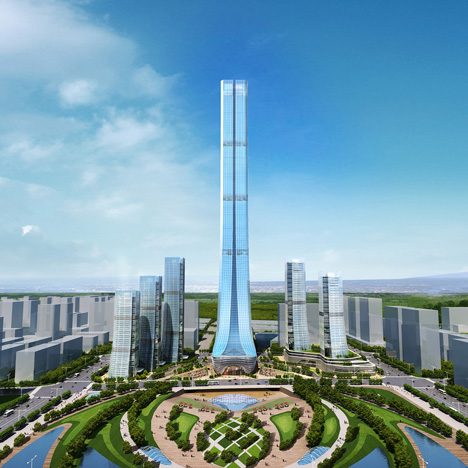 While Farrell was a supporter of Piano's controversial Shard skyscraper at London Bridge station – also with 72 storeys and measuring up at 310 metres tall – he believes the parklands, conservation areas and listed buildings surrounding Paddington make the new skyscraper model unsuitable.

But Farrell claims his resistance to the scheme is not solely regarding height.

He said the Paddington scheme should aspire to emulate the regeneration created around other major stations, citing the Broadgate development at Liverpool Station and the recent overhaul of the area surrounding King's Cross and St Pancras stations.

"I genuinely believe in tall towers in the right place and have done them successfully, which has been recognised by others," said Farrell, noting that government organisation Historic England has used one of his own high-rise projects as "an exemplar for tall buildings in an appropriate location".

Farrell's rival plans feature a group of 10- to 18-storey blocks measuring no more than 55 metres in height, which have pedestrian permeability at ground and underground levels.

The architect believes this masterplan could provide over 1,000 homes against the 350 offered by Piano's "Paddington Pole" and double the development area. The proposal would also increase commercial space below ground level to decrease its presence.

Farrell is perhaps best known for his contribution to the Postmodern movement, which includes the brightly coloured television studios he designed for TV-am and London's Charing Cross Station. He is considered one of the "big five" of late 20th-century British architecture alongside Norman Foster, Richard Rogers, Michael Hopkins and Nicholas Grimshaw.

His studio Farrells has also completed several major infrastructure in Hong Kong including Peak Tower, a shopping centre that houses a tram terminal in its half moon-shaped upper storey. The firm also designed MI6's headquarters on London's River Thames.

Renzo Piano, who completed the Shard in 2012, submitted plans for his cylindrical Paddington tower in late 2015.

The Italian architect is also working on a pair of residential high-rises for the £3 billion redevelopment of Sydney's Barangaroo South waterfront and a glass-sheathed tower in Miami Beach.

Read the full letter below:

Letter of Objection to the 'Paddington Pole'

I write to object to the proposals for the site next to Paddington Station, which include a 72 storey super tower.

I will set out below the reasons for my objections but in summary, I consider the proposals are too piecemeal and also they are too opportunistic (in that they are primarily confined to property/land that through particular circumstances happens to be in the hands of the developers). There is a real need for a comprehensive wider scheme that doesn’t miss this opportunity to make a greater substantial difference, both to the station, and to the run down area around this part of Praed Street. We have developed such a scheme in detail for this site.

Let me set out first what experience my objections are based upon.

• I was the appointed masterplanner for various lands around this immediate area; for Paddington Basin itself (acting for Chelsfield), for the school site North Wharf Gardens between the basin and Westways (acting for Westminster City Council) and for the adjacent hospital lands of St Mary’s (acting for the hospital Authorities).

• I supported the Shard involving the same architects and basically the same development team, in a letter submitted to the inspector at the Planning Inquiry, as I was the masterplanner for London Bridge Station area appointed by Thameslink and set out much of the strategy for this area. However, I consider the circumstances are very significantly different here at Paddington in that Paddington is a much more sensitive site, given the proximity to Royal Parks, domestic scale squares and terraces and houses in conservation areas, and the closeness of listed buildings.

• I have been a local resident for 15 years and have had my office here at the same local address for over 30 years. I feel passionately about improving our local mainline station and its environment in a much more comprehensive way than is shown in these proposals.

• I was on the Royal Parks Review Group and have advised subsequently, particularly on Hyde Park/Kensington Gardens, as a formal planning advisor.

I acted for Sellars on schemes for Paddington Station and the area around, including the site of the application, for approximately 2 years. These schemes were consulted widely and were supported at senior level by:

• Westminster City Council (and we met several times with their senior planners who set height limits which we agreed with, 18 storeys maximum in part, with the majority at 10 storeys)

This scheme and feasibility work, in one iteration favoured by the transport bodies, was extended to the station itself above and below ground. It included the hospital buildings adjacent, which are surplus to their requirements, and the hotel above the station. Its benefits were far more extensive and generous than the proposed scheme, including:

• A transport integrated, medium-rise development of up to 1200 homes and over 400,000sqft of commercial space (far more residential and commercial space than is being proposed by the super tower).

• A contextual scheme of mainly 10 storeys at the edges with taller residential components that reach a maximum of 18 storeys (compared with 72 storeys for the super tower).

• Integration of all development areas with the adjacent transport interchange (far more comprehensive than the planning application).

• A new front door to London’s western gateway, Paddington Station (much wider and more generous than the planning application).

• Integration with the hospital masterplan to the east (an integration which hardly exists in the planning application).

• The upgrading of Praed Street as the high street to Paddington Town Centre, including active building frontages and improvements to the public realm.

Note: We also studied feasibilities and developed proposals for the urban block to the east of London Street. This excluded the main station and the hotel above and included only the Royal Mail site, Mercure Hotel and a part of the hospital site. This scheme also provided floor areas well in excess of the super tower, with heights again from 10 to 18 storeys (see chart below).

The potential opportunity to plan more widely for Paddington Station area is considerable and needs to be addressed in a much more comprehensive way, as:

• Paddington Station is a major transport hub of enormous importance to London.

• It is hugely important as a historic centre for transport innovation – the Roman Road, the Grand Union Canal, the Great Western Railway and Goodsyard, London’s first bus service, London’s first underground line, the Westway, the Heathrow Express and now Crossrail and connection to HS2.

• Other major recent station developments such as at St Pancras King’s Cross, London Bridge etc. have demonstrated that London stations are becoming regenerated people places and town centres in their own right. Paddington must aspire to an integrated comprehensive scheme like that at Broadgate/Liverpool Station and at King's Cross/St Pancras. This piecemeal, opportunistic scheme falls well short of these precedents.

• Paddington is one of the very few remaining mainline stations without a comprehensive plan. The proposals have no masterplan of convincing thoughtfulness and, consequently, they are too piecemeal and opportunistic.

• In particular, our scheme and feasibility studies established that a viable scheme of medium rise (maximum 18 storeys, 55 metres) would be achieved for these developers with far more development area than the super tower.

The chart below shows that there is no capacity advantage to building high as there is ample space to get the area needed to comprehensively renew the station and area around, without going higher than 18 storeys maximum in a mix of mid-rise buildings. Note, most of the buildings were 10 storeys, only in places in the centre were they 18 storeys.

We also calculated the existing station concourse to be 9,754m2. Our scheme increased this to 13,674 ft2.

I genuinely believe in tall towers in the right place and have done them successfully which has been recognised by others. For example Historic England, when opposing the Shard, used our scheme at Chelsea Waterfront as an exemplar for tall buildings in an appropriate location. We have designed and built tall towers (such as KK100 in Shenzen, the tallest building ever by a British architect) but in sensitive locations we always pursue a medium-rise, high density scheme as first choice. Good examples in London are the MI6 building which was as large in area as the “Green Giant” which was originally proposed on the same site at Vauxhall. Instead of 45 storeys we produced a scheme, now MI6, which at its maximum is 13 storeys and with the same floor area. Similarly, at Marsham Street in the Borough of Westminster, we built the Home Office at 6,7 & 8 storeys to replace 20 storey buildings (The Department of Environment HQ) that intruded into key views of the Palace of Westminster among others. We were able to design the Home Office complex with much lower height and with a larger floor area, with more mixed use (eg. houses and shops) and with pedestrian permeability through the site for the first time.

I am convinced we have proven that there is a fully workable mid-rise solution to Paddington Station site without building a super high rise tower. The latter provides no actual gain in floor area and, in fact, provides significantly less floor area. This is a sensitive location, next to conservation areas and historic buildings, and to a very significant Royal Park. So the first route to explore must be a lower rise answer and the very last route that is acceptable (for environmental, architectural, urban design and planning reasons) is to pursue a super tower of 72 storeys in my view. I feel particularly strongly as a local resident (home and office) as well as professionally. I have always been committed to thoughtful urban design and planning as the basis for good architecture, which this planning application is not.