Farrells has proposed a series of low-level bridges over the River Thames to help stimulate water-side development in east London.

The studio headed up by architect Terry Farrell has released plans for six new bridges to the east of Tower Bridge. There are currently 34 crossings on the river, however all but one are placed to the west of the iconic bridge.

Farrell said that, as London's population increases, it fast approaches megacity status and will require better infrastructure, and social and affordable housing. The architect suggests enough developable land could be opened up around one such crossing to create 47,000 new homes.

The proposal follows a call from London mayor Boris Johnson to create 13 new river crossings to improve travel across the capital, and to create new jobs and homes.

"London is a great world city," said Farrell. "Its economy continues to thrive, it is a global centre for innovation, creativity and culture, and its population will reach 10 million by 2030 – Europe's only 'super metropolis'."

"As a result of its success, London needs more housing on a bigger scale than ever before," he added. "Building low-level bridges in east London – with opening sections to allow river traffic – is one of the most important things we can do to transform housing delivery in London."

Suggested links between east London areas include Canary Wharf to Greenwich, Barking to Thamesmead, and Surrey Quays to Canary Wharf. A further bridge could replace the Woolwich Ferry service.

These low-level bridges would lift a few times a day to let tall ships pass through, allowing traffic to pass along the river.

"In Thamesmead, 47,000 housing units could be developed within a 2 km (1.2 miles) radius of the proposed low-level bridge," said the architect. "It would also make 10,000 jobs accessible to people living in the area."

Engineers Buro Happold, who worked with Farrells on the proposal, said this increased footfall would bring economic growth to the areas around the river crossings. It estimated 7,000 daily commuters would spend an estimated £7 million each year in local businesses.

The firm also estimated a 10 per cent increase in land value within 10 and 15 minutes walking distance from pedestrian bridges, while crossings with public transport connections could see even greater growth. 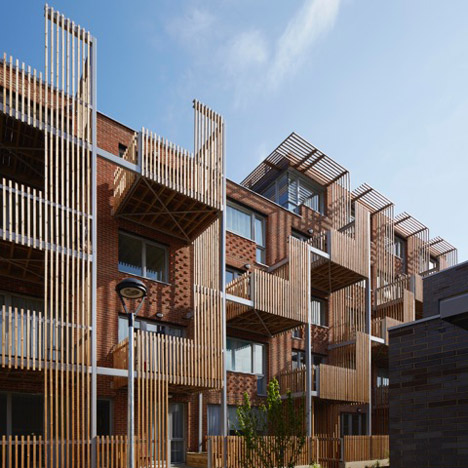 "East London has the city's greatest potential for regeneration, but it also has the lowest levels of accessibility," said Farrell.

"They would act as catalysts for mixed-use development on either side of the river, turbo-charging existing plans for areas such as the Royal Docks and Thamesmead."

Terry Farrell recently spoke out against Renzo Piano's proposal for a 72-storey skyscraper near London's Paddington station. The plans for this development were withdrawn for revision earlier this week.

Farrells is also currently working on several projects in China including two masterplans in Shenzhen's Qianhai financial district and a 560-metre-high skyscraper in Jinan.