Connected by watery and verdant courtyards, these agricultural offices were designed by CC Arquitectos for a soilless vegetable farm in the Mexican state of Guanajuato (+ slideshow).

The firm led by Mexican architect Manuel Cervantes Cespedes designed the offices for Next Vegetales, a company specialising in soilless growing systems.

Its hydroponic farms use water rather than earth to produce primarily leafy vegetables and melons all year round.

Set on an expanse of open farmland, the new 1,250-square-metre building is sandwiched between two grow houses at the Next Hydroponic Plant near the city of León.

The architect wanted to create a workplace with a domestic scale, providing a visual connection between both the administrative and the agricultural parts of the business.

So he fragmented the office space into a series of white-rendered volumes separated by planted courtyards, intended to encourage chance encounters between employees.

Framed views of the adjacent grow house act as a constant reminder of the farm's output. 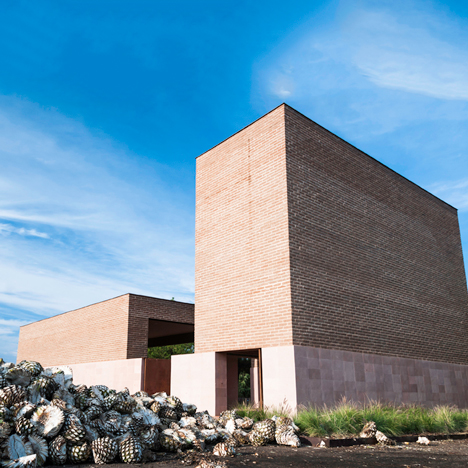 Estudio ALA completes terracotta chapel at a Mexican tequila factory

"The idea behind this project was to locate the complex's offices in a space that would draw attention to the constant interaction of the management departments in order to create a harmonious environment," said Cervantes Cespedes, "moving away from the traditional office feel and towards a collective experience of working together with a shared purpose."

"In common with other projects, I found that I was working with a piece of land without the ordinary limits found in the ordinary concept of a plot or property," added the architect, whose past projects include a holiday home with a rooftop stable.

One courtyard is painted a vibrant yellow – the same colour as the mosquito netting used inside the production houses. It hosts an installation by Mexican artist Jerónimo Hagerman, who often uses plants in his work.

Here, benches are dispersed among rows of vines, which are strung on cables over narrow pools of water.

"He opted for the Cissus antarctica vine to create a labyrinth of natural benches and curtains, in allusion to Next's hydroponic system," explained Cervantes Cespedes.

A concrete roof slab extends over some of the courtyards, providing partial relief from the sun while still allowing natural light to filter into the glazed offices.

More architecture and design in Mexico