Located in the Ribeira Sacra wine region, the old dry-stone outhouse would typically have been used for storing wine, spirits and meat, as well as for providing a sheltered place for keeping both straw and livestock.

But Cubus Arquitectura founders Estel Ortega Vázquez and David Pou van den Bossche have completely rebuilt the interior to create a three-bedroom residence, including secluded terraces and a living room that opens out to the landscape.

Achieving this involved cutting away sections of the walls, hollowing out corners and replacing the roof. 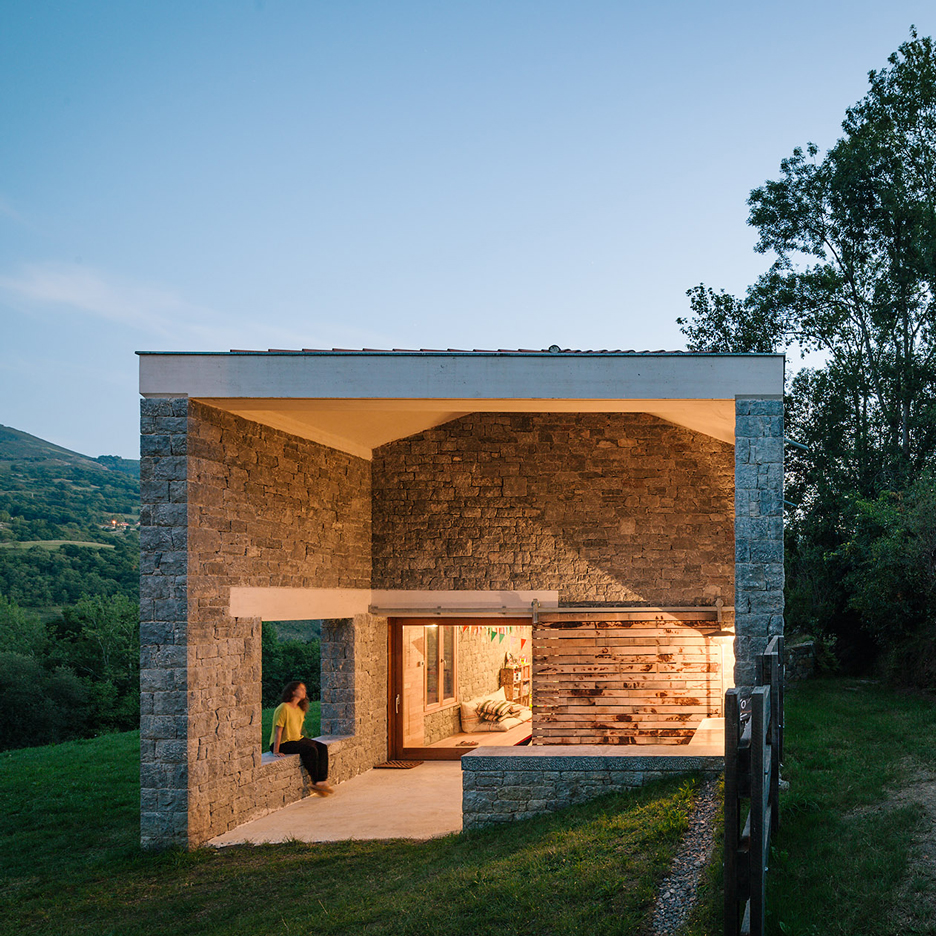 "The project respects the original volumes in a will to remain almost intact in its integration into the environment – a condition that works by emptying the corners to generate light and well-ventilated spaces inside," he told Dezeen.

The first is two storeys high and was originally used as a haystack, but now contains two bedroom suites. The larger single-storey volume would previously have housed the animals and cellar, but is now a split-level living space with the third bedroom in one corner and two corner courtyards.

Both volumes are partially buried on the side that faces the road, while their east facades are exposed to the landscape. To suit this arrangement, there are no windows on the street-facing western walls.

This has led local residents to nickname the building The House Without Windows, although there are two large rooftop openings that bring daylight down to the two secluded courtyards.

"By emptying the corners, patios are created that offer diagonal views, interior lighting, and cross ventilation," said the architect.

"This strategy defines not windows but voids on the facades, giving an appearance of a tectonic house without windows, but establishing an continuous relationship with the landscape between inside and outside."

The new roof was constructed using slate recycled from an old house in the area. But wood is the predominant material inside, used for flooring, surfaces and window frames.

Contemporary white cabinets, chairs and fittings were chosen to furnish the space, alongside more traditional elements including large ceramics and a bulky kitchen table.

Other examples of converted wine cellars in Spain include Philippe Starck's Alhóndiga Bilbao Cultural and Leisure Centre in Bilbao.