Taking influences from the vernacular houses of the southern US, this low-cost house in Houston by ZDES architects is designed to accommodate a family, but can be divided up to allow the owners to rent out private areas.

The 139-square-metre house, called Shotgun Chameleon, was conceived as a prototype that could be adapted with a variety of room configurations and facade treatments, for different living and street conditions.

The home is designed so that it can be divided up in a variety of ways to suit a single-family unit, multi-generational families, live-work arrangements, or to allow different parts of the property to be rented out.

Zui Ng – founder of ZDES and an assistant professor at the University of Houston's Hines College of Architecture and Design – developed the idea after studying the vernacular architecture of the southern states, including the shotgun houses of New Orleans.

Shotgun houses are typically one-storey buildings with rooms arranged in a single row back to front. He noticed that many of them were subdivided with front rooms rented out for commercial uses, and side doors that allowed for a private entry. 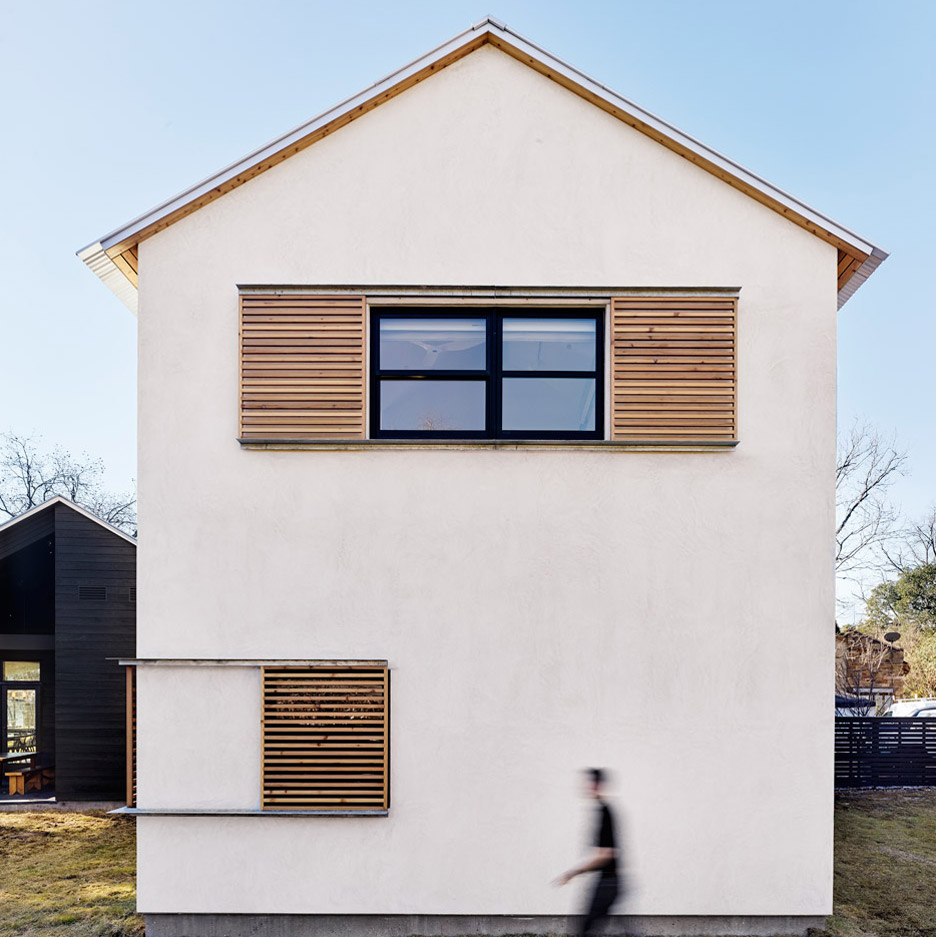 "Shotgun Chameleon is inspired by Gulf Coast raised shotgun houses and versatility of chameleon skin," said the firm. "Flexibility and adaptability of interior space is key to this design."

The house has three bedrooms and two bathrooms, with interiors paneled in plywood and wooden siding and an external staircase as well as an internal one.

"Tenants on the upper floor could use the external stairs," he added. "This same setting could also be used as live-work space with the bottom unit as office spaces."

The exterior is also designed to be adaptable. On a residential street, the house could be covered in wooden siding to blend in with its neighbours.

On a commercial or mixed-use street, the facade could become a billboard or a frame for signage. Louvres could also be added to control light and heat levels.

The built version features a perforated metal mesh screen on the street-facing facade, and wooden slats on the side walls.

A cut-out in the slats frames the exterior staircase, and a large balcony at the front can accommodate a family-sized dining table.

"The design of the house also aims to revisit and to celebrate the idea of balcony and porch living, which is rooted heavily in the vernacular of the neighbourhood, Freedmen's Town,"  said Ng of the historically African-American neighbourhood.

"The balcony not only provides a great social space for the residents but also encourages interaction with neighbours on the sidewalk or across street," he added.

The house is designed to use natural ventilation as much as possible, with openings positioned to create a through-flow of air and reduce the need for artificial cooling.

The use of simple materials, low-energy cooling, and the possibility of subdivision for commercial uses is intended to make the Chameleon Shotgun both environmentally and economically sustainable.

"The renting out option helps generate income to offset the cost of a mortgage," added Ng. "This encourages a more sustainable way of home ownership."

Other recent low-cost houses include a barn-like house in New Haven, Connecticut, designed and built by Yale students, and a mirrored house in Slovenia by Delugan Meissl.

Photography is by Paul Hester