The glazed public areas of this cultural centre on the French island of Corsica are sandwiched between a solid concrete base and an upper storey clad in perforated golden metal (+ slideshow).

Designed by Paris studio DDA in collaboration with local firm Atelier Architecture, the Cultural Centre of Bastia is located to the south of the Mediterranean city.

It forms part of a regeneration project aimed at improving amenities for a neighbourhood predominantly consisting of 1960s housing blocks.

Surrounded by parkland, the building accommodates a media library and an auditorium. 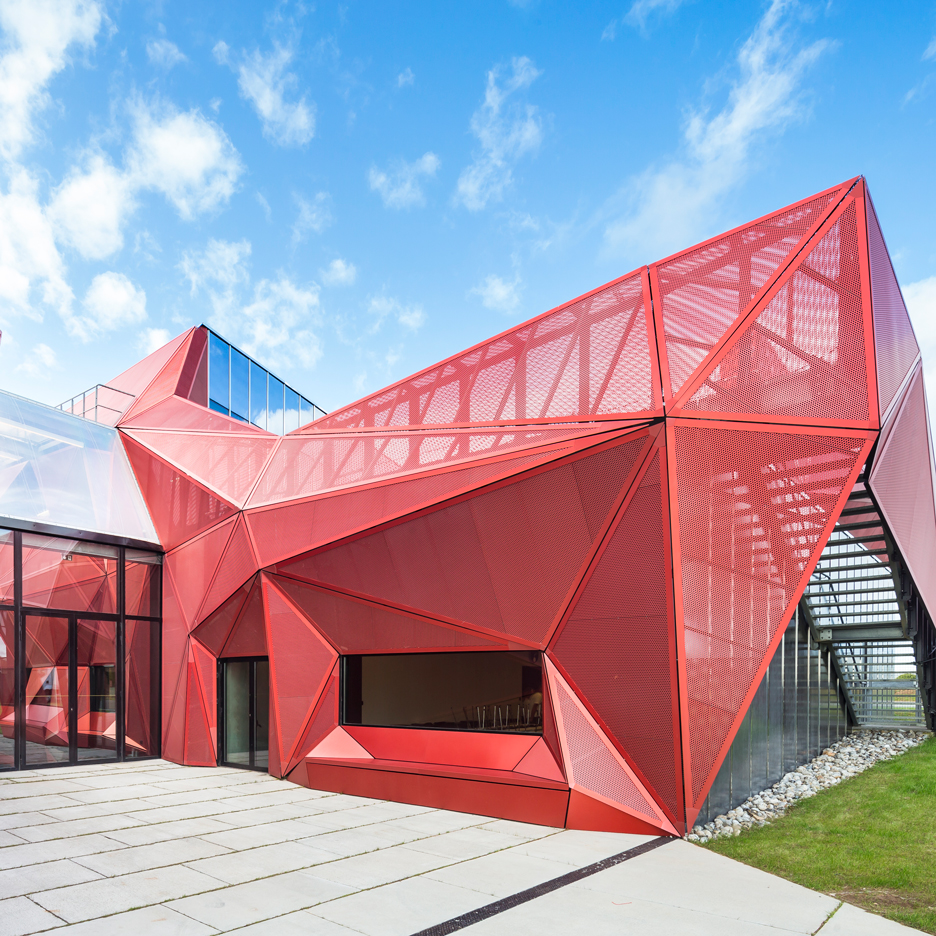 "The building site is conceived as a large park open onto the city of Bastia," DDA co-founder David Devaux told Dezeen. "The border fences are removed, and the vegetation is preserved and developed in order to enhance the narrow relation between the cultural centre and its surroundings."

"Our desire was to make it accessible to as many people as possible," he added, "a place where we are able to read in tranquility while we take profit of the environment that surrounds us, the immensity that is the sea and the horizon."

The brief called for a facility that can accommodate a variety of activities, so the architects divided the building up into different sections and selected a palette of materials to accentuate the varying qualities of each area.

The podium contains the auditorium, alongside rehearsal rooms, dressing rooms and technical areas.

It is constructed from concrete blocks with a dark earthy finish, designed to emphasise that this portion of the building is emerging from its sloping site.

"The show rooms – places of darkness, of turmoil, of agitation – are gathered in a solid base, a telluric architecture built of concrete blocks in earth tones, anchored to the ground," said Devaux.

A strip of glazing fronts the publicly accessible ground floor, sandwiched between the concrete plinth and the metal-clad upper level. This floor contains a gallery, a ticket hall and bar that opens onto an adjacent plaza.

In contrast to the dark colouring of the auditorium level, the upper storey is designed to express a sense of brightness. Perforated cladding made from Tecu Gold – an alloy of copper and aluminium – screens glass walls beneath.

"Our search for aerial architecture led us to this special material which facilitates the entry of natural light and lets us enjoy the shadow areas created by pine and eucalyptus trees," Devaux added.

"The gold volume in the trees is like a chanterelle mushroom among the moss."

Other projects featuring similar golden cladding materials include a refurbished community centre with angular walls in Paris and a university building in Kortrijk with faceted frames around its windows.

The media library on the top floor is lined with full-height windows leading onto a terrace that extends along two sides of the building.

The abundance of natural light and views of the sky help create a comfortable environment for working or relaxing.

The contrast between light and darkness is continued throughout the interior.

Some areas feature a dark colour palette that focuses attention on the views of the surrounding landscape, while others celebrate the daylight that floods in by utilising lighter materials.

Photography is by Joan Bracco and Cécile Septet, unless otherwise stated.