Concrete piers support the aluminium-clad blocks of this new architecture school building at the University of Portsmouth, England, designed by Penoyre & Prasad around a landscaped courtyard (+ slideshow).

The Eldon West building was designed by London-based Penoyre & Prasad to accommodate the four schools of the Faculty of Creative and Cultural Industries.

It provide a new home for the School of Architecture and Interior Design, flanking a new courtyard at the heart of the institution's city-centre campus.

The facility was built as part of a masterplan to improve connectivity between various campus buildings.

It replaces a smaller building on the western edge of the courtyard. In addition to the architecture school, it contains an exhibition space, a cafe and a range of studios and meeting rooms.

"Eldon West is a linking and completing building, a portal to the courtyard and faculty that surrounds it," the architects explained. 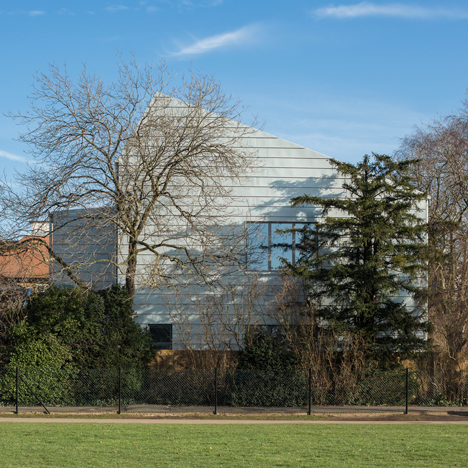 The building steps up from three storeys at the south to five at the north to maximise light into the courtyard and its presence on the corner with Winston Churchill Avenue."

Intended as a showcase for the faculty, the building features a large ground-level window on its street-facing elevation, offering views through to an exhibition space and the courtyard beyond.

Glazed teaching spaces jut out above the entrance, continuing the line created by the curtain wall of an adjoining remodelled building.

Above them, an overhanging brick facade references the heritage of the area.

Meanwhile, openings in the northeast corner are surrounded by angled aluminium frames that reflect indirect light into the building.

The elevations lining the courtyard feature a more irregular plan than the linear street-facing facade, with a block containing the cafeteria and lecture theatre projecting outwards to promote its connection with the outdoor areas.

Aluminium panels clad the upper levels, reflecting light back into the public space and offering a blank surface that can be used for visual projections. The roofs of the upper layers shift and fold back to form a series of terraces.

A glazed five-storey atrium is located in a corner facing the courtyard. It contains a staircase leading up to the 200-seat lecture theatre, screening room and seminar rooms on the first floor.

Open-plan studios for the architecture students are situated on the upper storeys, flanked by large circulation and learning spaces that encourage interaction between students from different departments.

Penoyre & Prasad's other educational projects include a zinc-clad studio building for a college in south London. It also updated the tower of Guy's Hospital in London by adding origami-like anodised aluminium cladding.