White-painted walls and plywood panels contrast with the existing wooden interior of this vintage clothing store in Saitama city, which was recently renovated by local designer Manabu Okano (+ slideshow).

When designing the Bankara Vintage Store, Okano aimed to update the interior of the building while respecting its original wooden features.

Panels of plywood and white-painted plasterboard were fixed to the existing timber structure. An opening between the two floors was created, allowing daylight to come in through windows on the upper level. 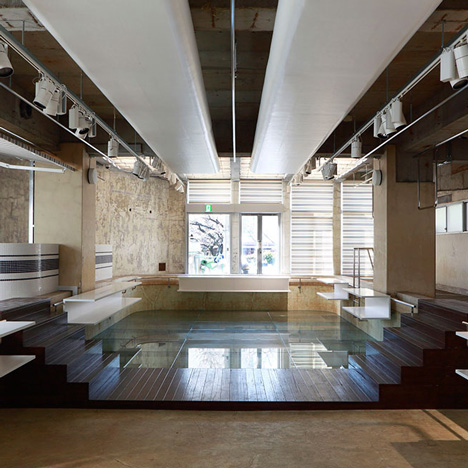 "I wanted to embellish the positive aspect of a wooden living house from the 1940s and combine the wooden construction with the atmosphere of the vintage clothing to create a unique space," said the designer.

"I aimed to make a space featuring the charm of the ordinary by incorporating the element of the flow of time into the interior," he added.

Trees were planted throughout the store, including a three-metre-high maple in the centre that reaches up to the level above.

Foliage is often used as a design feature in Japan, where examples include a fashion showroom with indoor rockeries in Kobe, and a cafe with a small tree growing inside it.

The store, which was originally used as a house, has a street on its south side and a garden on the north face.

A number of openings at ground level provide the interior with constant natural light throughout the day.

"The light coming in and changing from seasons to seasons, the evolving trees, the displayed clothes, all of those ever-changing factors provide the clients with a sense of freshness at each visit," he said.

Other boutiques in Japan include a narrow clothing store with boxy partitions by Reiichi Ikeda, and a shop in Tokyo by Nobuo Araki that sits inside an old swimming pool.