Photographer Peter Bloomfield spent four years behind-the-scenes on the construction site of London's Barbican Estate, documenting the iconic brutalist development as it "emerged from its chrysalis of scaffolding" (+ slideshow).

The post-war complex, designed in the 1950s by British firm Chamberlin, Powell and Bon, was under construction through the 60s and 70s. It was officially opened by the Queen in 1982, who described it as "one of the modern wonders of the world".

In the late 1970s, the Barbican Centre's first managing director Henry Wrong commissioned Bloomfield to capture the final few years of this process.

"The first photographs were taken on 5 November 1979 and the last one 3 March 1983," Bloomfield told Dezeen. "The last shots were pictures of Henry Wrong cutting the Barbican's first birthday cake." 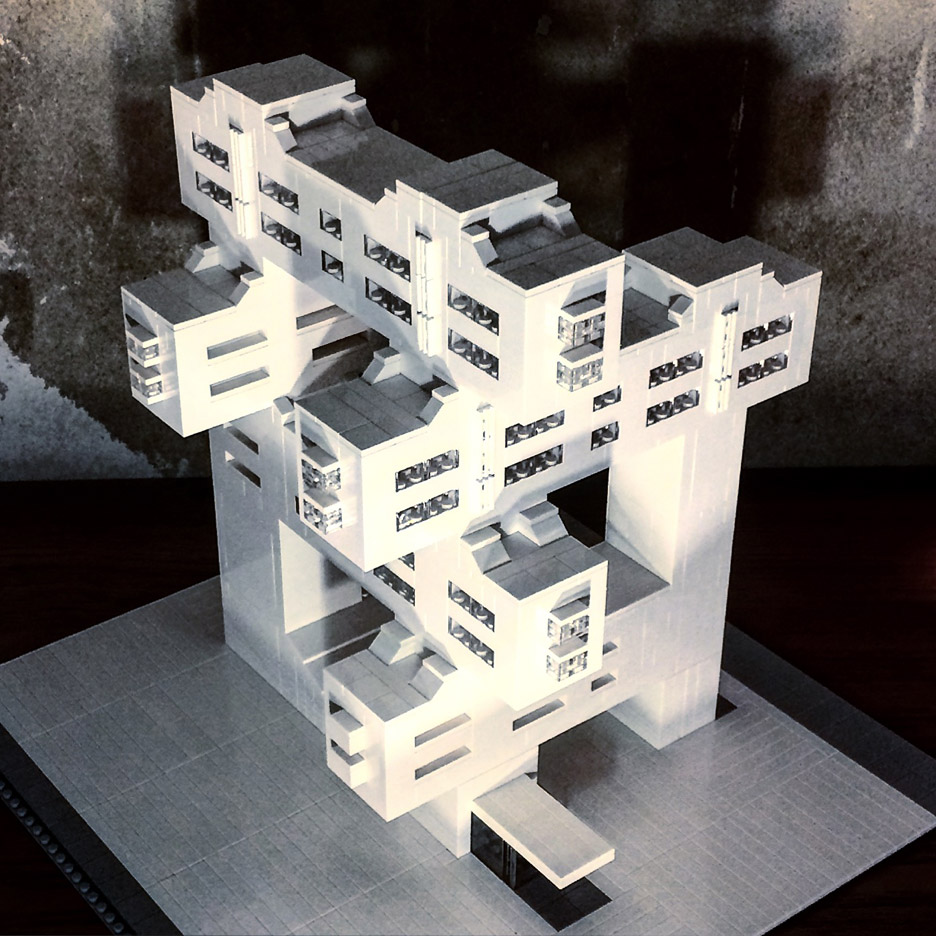 "There was no complicated contract," Bloomfield said. "My brief was to photograph the centre as it emerged from its chrysalis of scaffolding. To photograph everything. One of the staff gave me a lightening tour of the site and made familiar with the salient features. It was my first visit to the site and I quickly realised that this was to be a major commission."

The 1,400 images taken over these four years reveal the ambition and scale of the project, capturing the defining coarse concrete surfaces, elevated gardens and trio of high-rise towers as they were completed.

Bloomfield described the experience of seeing the huge complex come to life as one of excitement and admiration. "I normally photographed when construction was nearly finished and polished," he told Dezeen. "I felt I was present at its birth."

One photograph shows a construction worker finishing the famous textured walls by hand. "I witnessed the building emerging from raw concrete to a beautifully textured finish with the help of a number of jackhammers, clouds of dust, and a lot of sweat," Bloomfield said.

"Seeing and hearing these jackhammers at work, I questioned the sense in casting concrete and then chiselling away at the surface," Bloomfield added.

Another photograph captures the surreal moment when trees were lowered into the conservatory by crane, while a further shot shows workmen taking a break on the scaffolding, high above the concert hall.

"During the final stages one would have expected a scramble to finish and polish, but this seemed to take place in a gentle quiet way to make the place presentable to welcome the Queen," said Bloomfield.

Many of Bloomfield's black-and-white photographs of the Barbican are uncluttered by people. "When I was photographing the concert hall and the foyers, I often had the spaces to myself, with not another soul in sight," Bloomfield told Dezeen. "Under these conditions, I felt that I owned these places."

"Some months later when I returned to the Barbican, I was surprised to see that foyers walls had been decked with posters advertising events yet to come," he added. "Inevitable of course, but it did dilute the pristine quality that I was fortunate to experience."

"I do hope something of this scale will be built in the UK again." Bloomfield told Dezeen. "I think this is a great piece of architecture and very clever. To have fitted all the elements of the Barbican into such a crowded site needed a touch of genius."

A selection of images from Bloomfield's never-before-seen archive are being published by the Barbican in a new book, Building the Brutal, and on an accompanying website.

All photographs by Peter Bloomfield, courtesy of the Barbican Centre.