Architects Le Corbusier, Herzog & de Meuron and Gottfried Semper are depicted in drag to promote a series of talks about the industry's gender imbalance at Swiss university ETH Zurich.

The architecture department (D-ARCH) at ETH worked with local graphic designers Völlm+Walthert to feminise the portraits of the architects.

"The message was one: provocative, and two: with that shameless misuse of famous architects in drag, to attract attention on the gender imbalance in our profession," ETH's Charlotte Malterre Barthes told Dezeen.

Swiss duo Jacques Herzog and Pierre de Meuron – who agreed to their digital makeover in support of the cause – are shown with red lipstick, defined eyebrows and coloured wigs.

The late Switzerland-born Modernist Le Corbusier sports a yellow hairpiece, with bright blue eyeshadow underneath his signature round glasses.

The Parity Talks programme will take place at ETH from 7 - 8 March 2016. It will include lectures and roundtables that bring together established and successful architects, planners and scholars with students, assistants and lecturers at the institution. 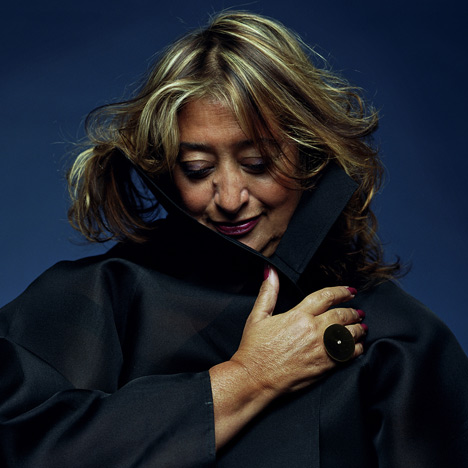 "The aim is a productive exchange and a focused debate to generate concrete steps towards gender parity, both within D-ARCH and the discipline at large," said ETH in a statement.

According to the university's figures, the architecture and planning profession is "plagued with an appalling gender imbalance" with women professionals amounting to 25 per cent and female professors counting for just 11 per cent.

The inaugural Parity Talks event was set up by lobbyists and female groups aiming to bring the topic to the top of the agenda.

"This is particularly relevant because the D-ARCH at ETH will see the freeing of positions due to many retirements in the following months, and this appears like a chance to improve the female ratios at the top," Malterre Barthes said.

"Of course, nothing is done and this is why these Parity Talks are important, as they are meet to be performative and offers direction for improvement."

The event is organised by the Parity Group with the support of D-ARCH, AAA and architektura.

Earlier this week, French architect Odile Decq was named as the recipient of the Jane Drew prize for raising the profile of women within architecture.

Zaha Hadid became the first woman in her own right to win the Royal Institute of British Architects' Gold Medal award last month. The RIBA's president said it acted "to right a 180-year wrong" by giving its highest honour to a woman.

However, a survey linked to the Jane Drew prize found that large numbers of female architects are reporting sexual discrimination or harassment.