Stockholm 2016: Russian designer Lera Moiseeva has created a tubular steel chair that is shaped to mimic the way plants grow.

Moiseeva based her Ray seat on the organic structure of plants and trees. The design references the shape of uprising plant roots, so the chair's five legs meet together from different angles, supporting the main body of the seat.

"For me it was a symbolic image of light and darkness," Moiseeva told Dezeen about her design concept.

The designer was influenced by a phrase from German philosopher Friedrich Nietzsche: "It is with man as it is with the tree. The more he aspires to the height and light, the more strongly do his roots strive earthward, downward, into the dark, the deep – into evil."

The sturdiness of the steel along with its minimal form make the chair versatile, so it can be used as both home or garden furniture. 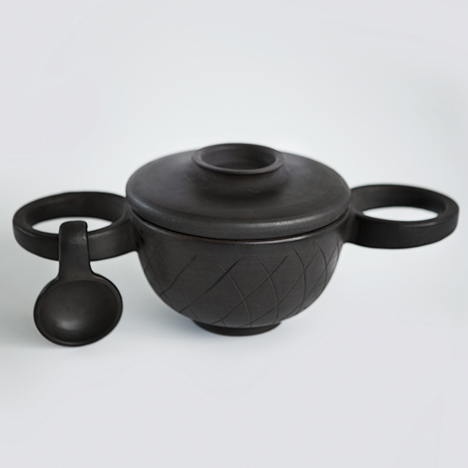 The Ray chair was part of the Naturalist exhibition in St Petersburg last year, for which 15 Russian designers presented work "to build a dialogue between nature and the object" according to Moiseeva.

The design was also presented at this year's Stockholm Design Week, which took place from 8 to 13 February 2016.

A single tube extends from the chair's circular seat to form the sweeping outline of the armrests. The back support comprises another curved steel element.

The simplicity and strong "personality" of the chair's design "make it ideal for both public and private space", Moiseeva said.

The chair was launched in dark green, black and white versions, but is available in other options.

Lera Moiseeva has previously designed a table set for ceramics company in a collaboration with designer Luca Nichetto.

Other examples of chair designs presented in Stockholm include stackable stools by Norwegian designer Kristine Five Melvær, and seats by Helsinki's Aalto University students, made of black-stained solid ash wood.