HHF Architects and Sadar + Vuga have won a competition to adapt and reconstruct Montenegro's Dom Revolucije, a monument to Socialist revolution that has lain unfinished and derelict for almost 30 years.

Swiss firm HHF Architects and Slovenian studio Sadar + Vuga will convert the Modernist building, whose name translates as Home of Revolution, into a usable structure for the city's residents.

It will now include a cafe, events spaces and an underground car park.

It was commissioned to commemorate the 30th anniversary of the city's liberation from Axis occupation following the second world war. The unusually shaped building made from concrete, red metal trusses and abundant glazing was intended to host a theatre, music school and events spaces.

Construction began in September 1978 but halted in 1989 as Yogoslavia disintegrated into separate nations. The uncompleted shell has remained empty in the 27 years that have lapsed.

"The project was intended to be an architectural hybrid that would represent the socio-political structure of Nikšić," said a statement from Basel-based HHF Architects.

"The proposal takes the existing architecture as a starting point and with pragmatic interventions, the new infrastructure reinvents the urban space." 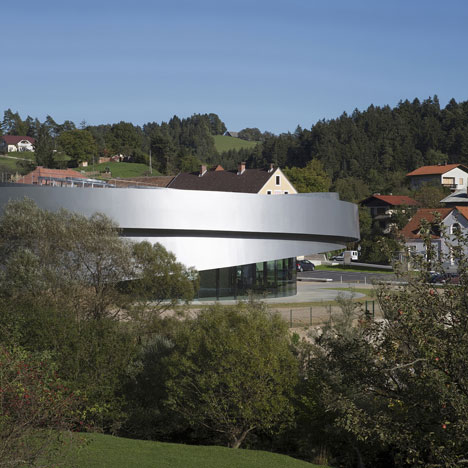 The proposal treats the structure as an "urbanscape" rather than a building, according to the architects. Interventions will be based around three "plug-ins" that create year-round facilities – rather than an overhaul of of the entire structure.

"Through analysis and local consultation it was determined that trying to complete the existing megastructure would not work, as such a project would be suited to a city more than ten times Nikšić's size," they said.

Built from glass, wood and insulating panels, these spaces will include a cafe, co-working office, gallery and educational workshops. They will account for 10 per cent of the building's overall area.

A promenade will take up a further 20 per cent, bisecting the building from north to south, and from east to west, to connect the Dom Park, interior spaces and underground car park.

The remaining 70 per cent of the space will be made safe but left undefined, flexible for use during one-off events.

Locating the car park underground will allow the ground floor to become more pedestrian friendly, with areas for cafe seating and a children's playground.

"The advantage of this approach is that it is flexible, affordable, and sustainable," said the team. "This strategy has the ability to address the current socio-political environment of Nikšić, without discrediting the existing architecture and without being ignorant to its past."

A room-sized model of Mušič's Dom Revolucije was on show at the Montenegro Pavilion during the Venice Architecture Biennale in 2014, in an exhibition highlighting the late-Modernist architecture of former Yugoslavia.

Boštjan Vuga of Sadar + Vuga and Simon Hartmann of HHF Architects were among the curators of the exhibition named Treasures in Disguise.

The centre's cylindrical form and rings of metallic cladding are based on a conceptual space station described by the rocket engineer Potocnik Noordung in his 1929 book The Problem of Space Travel.

Past projects by Basel firm HHF Architects include a spiralling lookout point near Guadalajara in Mexico, as well as a gallery and residence in collaboration with Chinese artist Ai Weiwei.

Renderings are courtesy of Sadar + Vuga and HHF Architects.