Jung's film forms one of the three chapters in Land Rover's City Evocation series, which shows US cities New York, New Orleans and Los Angeles as seen through the eyes of creatives who live there.

While also suitable for off-road driving, the Range Rover Evoque was created for city journeys and the films document the ways that cities can be discovered with the vehicle.

Called The Shape of New York, Jung's film follows his journey with his camera around his home town of New York City.

Jung is a fashion photographer known for his black and white compositions, which mix fashion, fine art and abstract geometry. He was born in Taiwan and grew up in Australia, but has lived in New York since 2004.

Jung narrates the journey – both in the car and on foot – describing how the geometric combinations of the city's architecture influence his work.

"I see New York City as a honeycomb, there are things moving in every level, flowing underneath, things flying above," Jung narrates. "There is a sense of not just one dimension but a multilevel, energised city going on all at once." 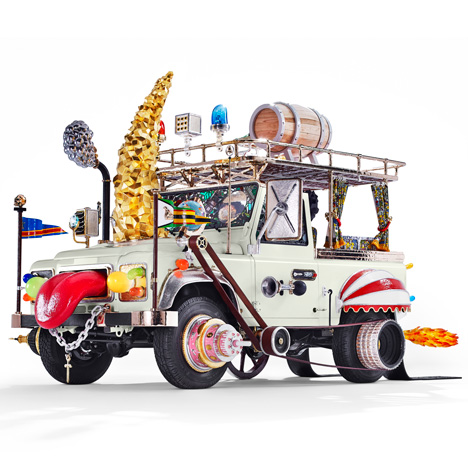 The photographer uses the car to follow his curiosity towards viewpoints including bridges, skyscrapers and distant skylines.

"Looking at shapes and structures, it's interesting to observe the difference between the micro and the macro," he says. "In my work, I look within those two boundaries to confuse the eye; to find a certain emptiness that goes beyond the outlines of a subject."

As the photographer navigates the city from Uptown to the Downtown financial district, the film juxtaposes fast-paced moments and those of stillness.

Similarities are drawn between Jung's work as a photographer, the architecture of the city and the car. Fragmented images of the city are seen through the car's sun roof, like a camera lens.

Hidden aspects of the city reveal themselves, such as distorted reflections of skyscrapers on the car bonnet.

Jung's journey takes him out of the city, the final shot showing him observing his home like an object from afar.

In the other films in the series, artists Cleo Wade and Liza Voloshin explore the visual character of New Orleans in their film The Colour of New Orleans, while DJ and producer Jason Stewart aka Them Jean uses noise and melodies in LA to make a new production in The Sound of Los Angeles.

Read on for more information from Land Rover:

The Range Rover Evoque enables new stories and adventures to be created in urban environments. While other Land Rovers are designed for off-road exploration, the Range Rover Evoque is focused on urban adventure – a vehicle capable of doing the things no other city car can, while also setting itself apart by it's unique Design and agile Capabilities.

Design: Contemporary design, thoughtful details and a unique exterior silhouette guarantees you'll stand out in the midst of the busy city landscape.

Capability: A vehicle capable in challenging situations, Range Rover Evoque tackles all terrain and weather conditions with confidence. A true Land Rover vehicle at heart, but with the agility to navigate tight city streets.