Skyscrapers tucked behind tower-blocks and nature imitating architecture are themes in Nikola Olic's urban photography series, which he describes as a collection of "individual poems".

Dallas-based photographer Nikola Olic has curated Structure Photography, an online collection of 88 digital photographs he took of architecture from cities across America, as well as Europe and Asia.

Each named image is paired with an accompanying written description by Olic and a set of coordinates that allows viewers to locate the subject of the image on Google Earth.

From Houston to Hong Kong, Olic's playful architectural vignettes invite the viewer to interpret the structures of familiar cities in new ways.

"I play with urban boundaries to 'frame' my photographs as individual poems," Olic told Dezeen. "They reimagine what urban structures might represent."

United Chrysler Nations presents New York's Chrysler Building peeking out from behind the city's United Nations Headquarters, creating a visual link between a national and an international building.

Another image, Carbon, Copy, is a snapshot of a tower covered in greenery in Milan that serendipitously resembles the tree next to it.

Constructed and Construction, Unrelated is a similar visual juxtaposition documented in Malmö, Sweden. The city's Turning Torso building by architect Santiago Calatrava is positioned in parallel to a nearby crane that echoes its form.

Olic does not artificially manipulate his photographs. His process involves scouring the cities he visits in search of existing observations which he then captures with his camera.

"Just like poetry, photography offers a mix of flexibility and constraints, creating a distinctly intoxicating creative space," he said.

"I rarely make multiple photographs of the same visual place, much like you wouldn't write two similar poems," Olic explained. 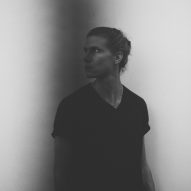 Digital photography is "too much to digest" says Simone Bossi

Green Living is a collage of a residential building in Hong Kong set against the city's lush hills, captured to look as if tower-block and nature are on top of each other.

Olic allows his past photography to inform the images he captures next.

"I have internal ideas and questions that I try to answer, remembering the process of discovery and composition in previous photographs, and applying it to whatever I might be doing in the present," he said.

"It is more of a constant involvement, discovery and enjoyment, always reconceptualising and readjusting."

While many of Olic's images present stark visual contrasts, some are disorienting blends of nature and the built environment, captured to create new patterns.

A particular example of this is Broken Building, an image of Dallas' Fountain Place skyscraper photographed folding into a cloud-spotted Texan sky that is reflected on the building's gleaming facade.

Should I Stay or Should I Go is a similar photograph from Dallas. An existing image of a wispy cloud on an advertisement banner erected to the side of a tower is almost identical to the natural sky behind it.

"While the collection is called Structure Photography, I think that 'poetic architectural photography' is a more apt way to describe it," concluded Olic.

Architecture is a popular source of creativity for photographers.

Photography is by Nikola Olic.