German designer Konstantin Grcic has created a set of seats based on furniture in a 15th-century Italian artwork, which are on show at Galerie Kreo in Paris.

The Hieronymus exhibition opened today and includes five new pieces by Grcic, who has worked with Galerie Kreo since 2004.

The range was designed to emulate the spatial qualities of furniture pieces depicted in Italian Renaissance artist Antonello da Messina's 1475 painting, St Jerome in his Study. Hieronymus is the Greek and Latin form of the name Jerome.

In the painting, the saint is shown sat at a desk surrounded by shelves on a raised podium, in the centre of a much larger room. Different shapes and niches are cut out from the furniture, enforcing the scene's perspective.

"What struck Grcic... is the degree of elaboration and architecture of the saint's study and the way it created a space in itself," said the gallery, which was founded in 1999.

Each of Grcic's designs offers a variety of seating places and positions, created by similar cut-out sections. He used fibre cement, aluminium, marble, wood and 3D printing to create the pieces, which vary significantly in shape and size. 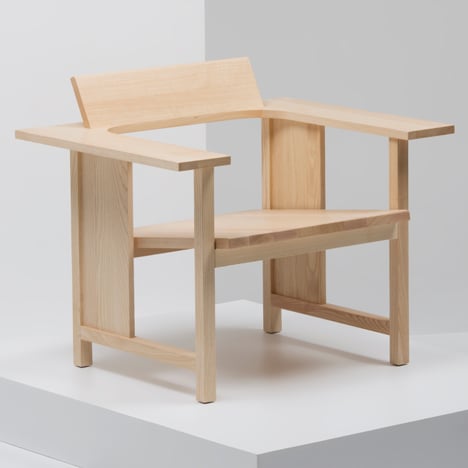 The walnut seat is a cuboid with sections cut away to form ledges at different heights, while a tall anodised aluminium cylinder is similarly deconstructed.

A grey ellipsoid made from 3D-printed sand and resin appears to be assembled from a set of components, and features circular holes across its surface.

Slabs of Carrera marble are arranged to form a fourth design, and the fifth is moulded from a fibre-cement composite.

"As he engages with the monumentality of the original furniture depicted in the painting, Grcic makes it mobile, and fluid," said the gallery.

Hieronymus runs from 23 March to 14 July 2016 at Galerie Kreo, 31 Rue Dauphine, Paris. The London branch of the gallery is wrapping up a show of 1950s French lighting designs tomorrow.

Grcic trained as a cabinet maker at The John Makepeace School in England before studying design at London's Royal College of Art. He set up his own industrial design practice in Munich in 1991, and has since become one of the world's most prominent contemporary designers.

Another exhibition of his furniture and lighting is now open at Germany's Kunsthalle Bielefeld museum. Other recent showcases of Grcic's work include a retrospective at Vitra Design Museum and a display at Munich's Die Neue Sammlung.