Indonesian architect Andra Matin chose multi-hued bricks, handmade tiles and bespoke terrazzo for this hotel in Bali, which is intended as a showcase for local design and craftsmanship (+ slideshow).

Andra Matin previously worked with the brand to design the nearby Potato Head Beach Club – a popular party venue conceived as a modern take on the Colosseum – so he was an obvious choice for the company's first Bali hotel.

The second, set to open in 2018, will be designed by Rem Koolhaas' OMA, while a third by Brazilian office Studio MK27 will follow in 2019.

For Katamama, Matin has designed a building with larger living spaces than any other hotel in the area.

Described by PTT Family as a "truly bespoke creation" that is both intimate and serene, the 58-suite hotel combines contemporary forms with traditional materials and finishes.

This is best demonstrated by the building's entrance, where a chunky canopy juts out at an angle to shelter a broad staircase. Here, the majority of surfaces comprise the multi-tonal Balinese bricks, interjected with some teak wood. 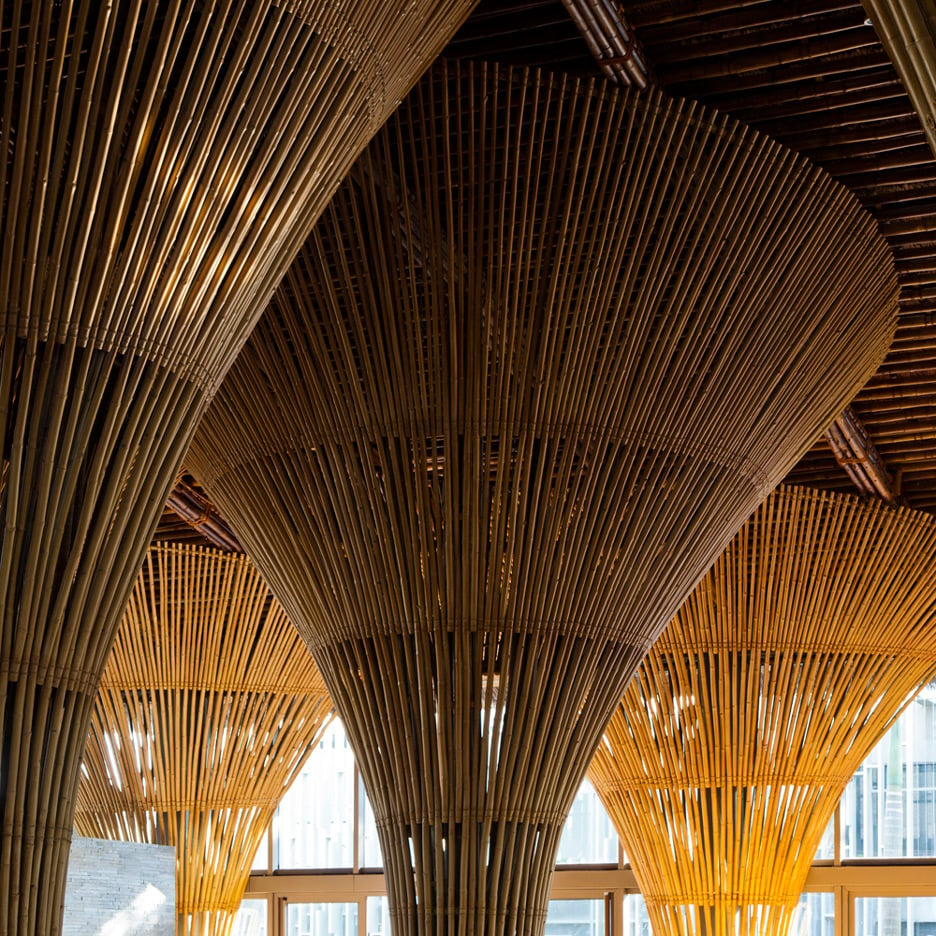 Other details include balconies fronted by perforated brick screens, spacious terraces and a 130-square-metre swimming pool.

Bricks continue to dominate inside the building, and have been left exposed wherever possible. But there are also decorative floor sourced from nearby Java, as well as terrazzo flooring that was made on site.

Singapore studio Takenouchi Webb was brought in do the interior design, in partnership with the hotel owners.

The furnishings they chose include vintage pieces from the owners' own collection, as well as some Danish mid-century classics, including rocking chairs by Hans J Wegner and seats by Arne Jacobsen.

But many of the other additions were created especially for the hotel, ranging from textiles to ceramics. For instance, the table runners are the work of Bali-based husband-and-wife team Tjok Agung Indigo.

Local textile workshop Tarum produced the natural-dyed, hand-woven rugs and bed throws in the guest suites, while the woven storage boxes in the room are the wooden of orchid-vine weavers in Tenganan, east Bali.

All joinery was built using Indonesian teak, overseen by Surabaya-based carpenter. There are also over 100 original artworks on show within the building, from artists originating from across Southeast Asia.

Katamama's other facilities include a lobby bar named Akademi, led by mixologist Dre Masso, and MoVida, an outpost of the popular Spanish restaurant from Australia.

MoVida's interior is very similar to the rest of the hotel, featuring Balinese bricks, rattan and teak.

By contrast, Akademi's interior is dominated by terrazzo, which appears in four different shades. Other details include brass accessories, royal blue seating upholstery, a blue tiled ceiling and a vintage 1970s pendant light.