Old doors and windows, antique wooden columns and metal drainpipes give this house in Mumbai an aesthetic its architects claim is inspired by the ramshackle buildings found throughout the city (+ slideshow).

It is located on top of a hill overlooking Mumbai, and is arranged in a traditional Indian style around a central courtyard to avoid unwanted overlooking from neighbouring buildings.

The architects were influenced by the ad-hoc building typologies that many of the city's inhabitants construct using found materials.

This prompted them to used salvaged materials in their design, helping to promote an alternative approach to recycling.

"Living in Mumbai, it is impossible to ignore the informal settlements in the city," said SP+S Architects in a project description, "and if looked at closely there are many lessons to be learnt in frugality, adaptability, multi-tasking, resourcefulness and ingenuity."

"A visual language emerges that is of the found object, ad-hoc, eclectic, patched and collaged," they added.

"An attempt has been made here to apply some of these lessons without romanticising or fetishising them."

At the front of the house, doors and windows salvaged from demolished buildings around the city are combined to form a surface that wraps around two sides of the living room.

Several of the reclaimed windows, doors and shutters retain their hinges, allowing them to be opened to provide views and natural ventilation. A bedroom on the floor above features a balcony made from blue glass that projects from the facade. 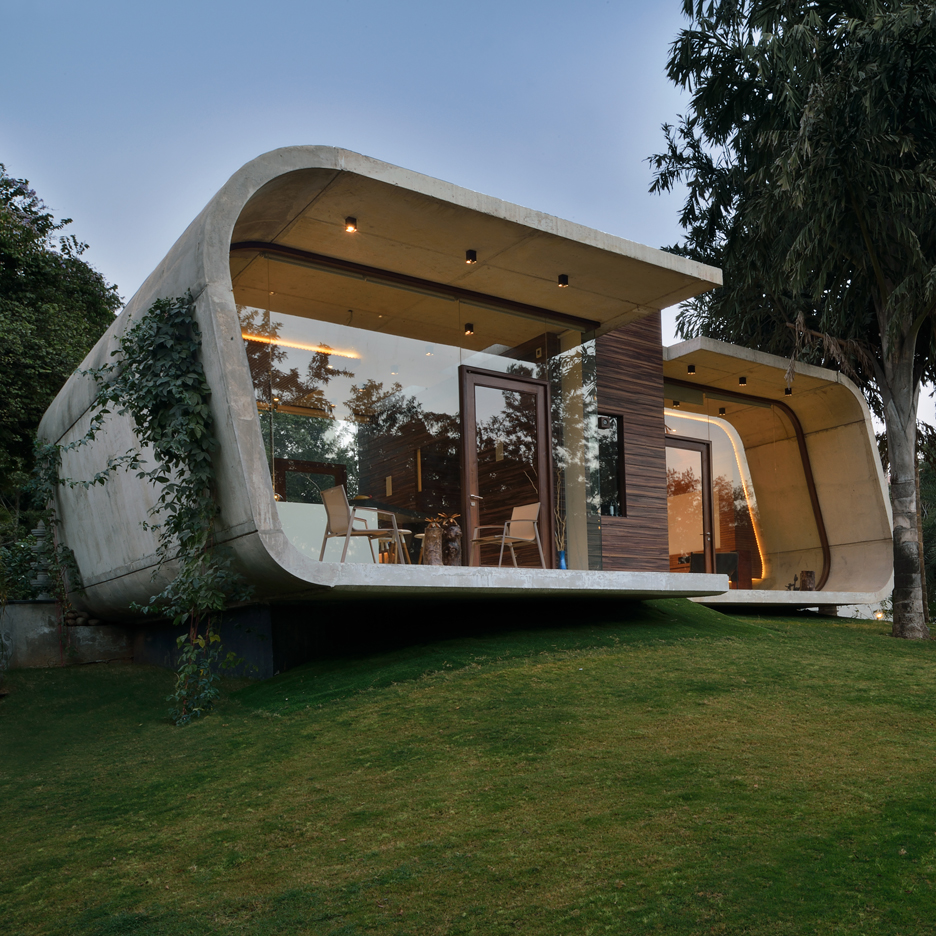 A paved parking area at street level is flanked by a brick-lined entrance and a carved glass wall. Behind this glazing, a Puja room provides a tranquil setting for prayers and contemplation.

Also on this level are rooms occupied and used by the household's staff, service areas including a lift encased in decorative chain-link fencing, and a 50,000-litre rainwater harvesting tank surrounded by rock removed during the excavation process.

On one side of a central courtyard, rusted metal plates are riveted together to form a cladding surface.

The courtyard also features a planter covered with colourful tile samples and a wall faced with unused stone slivers salvaged from a stone cutter's yard.

Another of the walls lining the courtyard is made from metal pipes of varying diameters that are fixed together to form a surface resembling bamboo stalks.

At the base of the wall, a series of spouts create a water feature during the monsoon period.

The architects sought to contrast the old, reclaimed materials with contemporary ones, including a concrete frame that wraps around the exterior and provides a sense of isolation from the neighbouring buildings.

The concrete surfaces are rough on the outside and smooth on the inside to enhance the notion of contrast.

The same material is used for ceilings inside the house, including in the main living and dining room where it is moulded into a ridged form.

The building's roof terrace accommodates a lightweight, steel and glass pavilion, topped with solar panels and decorated with 100-year-old columns removed from a dismantled house.

Recycled materials including old doors were also recently used to build a pavilion in Paris to coincide with the United Nations Climate Change Conference last year, while the interior of a bar in Shanghai by Chinese studio Neri&Hu features reclaimed timber flooring and found objects including an old sink.

Photography is by Sebastian Zachariah, Ira Gosalia and Pinkish Shah.