US studio Allied Works Architecture is nearing completion of a massive new home for the National Music Centre of Canada.

Renderings show a large building composed of two main volumes connected by a skybridge that passes over a plaza. The design features curved exterior walls and sculptural protrusions.

The project is the latest cultural building from Allied Works. Founded in 1994, the firm's portfolio includes the Clyfford Still Museum in Denver, the Seattle Art Museum and the Museum of Arts and Design in New York. 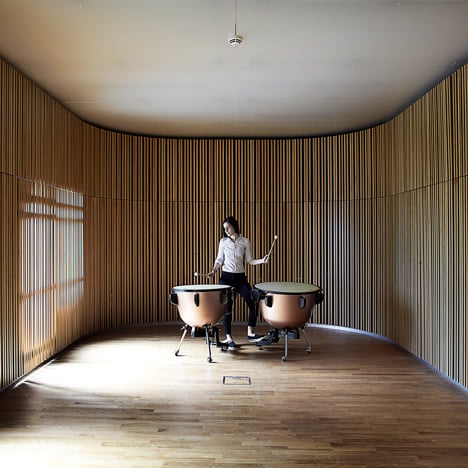 Billed as the first facility of its kind in North America, the centre will inform visitors about Canada's musical history through exhibitions, interactive programs and live performances.

"In our designs, we try to create transformational spaces," said Brad Cloepfil, founder of Allied Works. "For the National Music Centre, Studio Bell's nine towers are modelled by gravity and acoustics, and together create a silent and powerful instrument that will emanate music and light."

Construction of the centre began in February 2013. The building is rising in the city's East Village district, a once-rundown area that is being revitalised.

The now-shuttered King Edward Hotel, a historic building, will be refurbished and incorporated into the music centre as exhibition space. It will be connected to the main building via the skybridge.

"With the completion of Studio Bell this fall, the National Music Centre will become one of Canada's most significant national institutions, inspiring new generations of musicians and music lovers, and catalysing the redevelopment Calgary's East Village as a core urban district," said Andrew Mosker, the organisation's president and CEO.

In the eastern portion of the building, visitors will enter a central lobby that opens upward and is flanked by two helical staircases. Exhibitions and live performances will give visitors an introduction to the centre's many resources.

On the second floor, the main performance hall will overlook the lobby and serve as "the building's programmatic and structural centre". It will feature a movable acoustic wall that can be closed for intimate performances or opened up to the lobby and circulation spaces to "fill the building with music".

Galleries will be placed throughout the building to showcase the organisation's collection of more than 2,000 musical artefacts. "Between each is a pause of space that allows the visitor to reflect and reconnect to the building and prepare for the next encounter," the firm described.

Each floor has distinct programming. The first level, called Canada Music Square, will house a performance space and recording studio, while the second floor will feature material related to the history of Canadian music.

On the third level, interactive elements and pieces from the centre's collection will convey the "physiological and emotional dimensions of music and its power to affect our mood and environment". The fourth floor will offer visitors the chance to play a range of musical instruments.

The fifth floor will contain The Cloud lounge and Canadian Music Hall of Fame.

Allied Works has a number of projects now underway around the globe. These include a US embassy compound in Mozambique, the Veterans Memorial Museum in Columbus, Ohio, and studio and production spaces for Theory and Helmut Lang in New York.