An installation by Japanese artist Yayoi Kusama originally created for the 1966 Venice Biennale has been reconstructed near Philip Johnson's iconic Glass House in Connecticut (+ slideshow).

Titled Narcissus Garden, the installation consists of 1,300 steel spheres that float on the surface of a pond, each with a diameter of approximately 30 centimetres.

The balls have been placed in an area of Johnson's Glass House estate in New Canaan called the Lower Meadow, in front of a pavilion designed by the architect close to the his famed 1949 glass-walled house.

A version of the piece was first created 50 years ago by Kusama, the 87-year-old Japanese artist, for the 33rd Venice Biennale.

It is the latest art work to be exhibited at the estate, which encompasses 49 acres (20 hectares) and features 14 structures designed by Johnson. In 2014 Japanese artist Fujiko Nakaya enveloped the Glass House in an artificial cloud of mist.

Kusama's installation opened on 1 May and will be in place until 30 November 2016.

"Drifting in the newly restored pond, the spheres will move with the wind and follow the pond's natural currents, forming a kinetic sculpture," said the US National Trust for Historic Preservation, which owns the property.

The mirrored surfaces of the balls reflect the sky and natural surroundings, as well as the Pond Pavilion, which Johnson built in 1962. 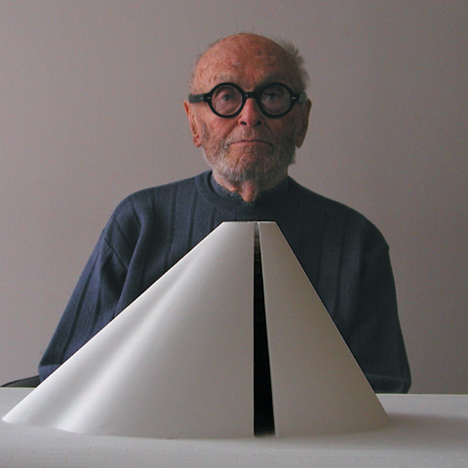 "We are honoured to be working with Yayoi Kusama, an artist Philip Johnson both admired and collected," said Irene Shum, curator and collections manager at The Glass House.

Johnson, whose association with Nazism is detailed in a new book, died at the house in 2005. The Trust acquired the estate in 2006 and opened it to the public the following year.

Johnson would have celebrated his 110th birthday this year. His notable works of architecture include the AT&T Building in New York.

"This exhibition playfully engages the entire site, creating a celebratory mood for Philip Johnson's 110th birthday and the 10th year since the opening of this museum," said the trust.

The 1966 version of the installation featured globes made of silver-coloured plastic.

It was both a sculpture and performance piece, as the artist sold the balls to visitors for $2 each. A sign accompanying the installation stated: "Narcissus Garden, Kusama" and "Your Narcissium (sic) for sale".

Versions of the sculpture have been included in a number of exhibitions, including a 2010 sculpture show organised by the Louvre for Paris' Jardin des Tuileries and the 2004 Whitney Biennial, for which it was installed in Manhattan's Central Park.

The installation also has been re-created at historic residences, such as Chatsworth House in Derbyshire, England.

Another work by Kusama, titled Pumpkin, has also been recently installed at The Glass House. Created in 2015, the shiny steel sculpture is shaped like a pumpkin, as its name indicates, and is punched with holes.

The piece has been installed on a hillside, on a concrete footing where a sculpture by American artist Ellsworth Kelly once stood.

"The first time I saw a pumpkin was in a farm in elementary school," said Kusama in a statement. "In Japanese, a 'pumpkin head' is an ignorant man or a pudgy woman, but for me, I am charmed by its shape, form, and lack of pretension."

In addition to these two works, a third piece by Kusama will be on view later this year, from 1 to 26 September.

The artist will adorn the walls and doors of The Glass House with polka dots, for an installation called Dots Obsession – Alive, Seeking for Eternal Hope.

"Visitors who attend the exhibition during this period will be offered the unique experience to simultaneously see the world through the eyes of both Philip Johnson and Yayoi Kusama," said the organisers.

"The polka dots directly engage the architecture of the Glass House, complementing its structure and aesthetics, breathing new life into the house."

Photography is by Lane Coder.