Milan 2016: in this Dezeen movie for Caesarstone, designer Tom Dixon explains how the four sculptural kitchens he created for The Restaurant installation in Milan were designed to satisfy "the mini celebrity chef" in people.

Visitors were encouraged to move between the kitchens, with each one serving a different course from a menu devised by Italian studio Arabeschi di Latte.

"It is a fully working restaurant, and what we have created is four kitchens based on the four elements of fire, air, water and earth," Dixon explains in the movie. 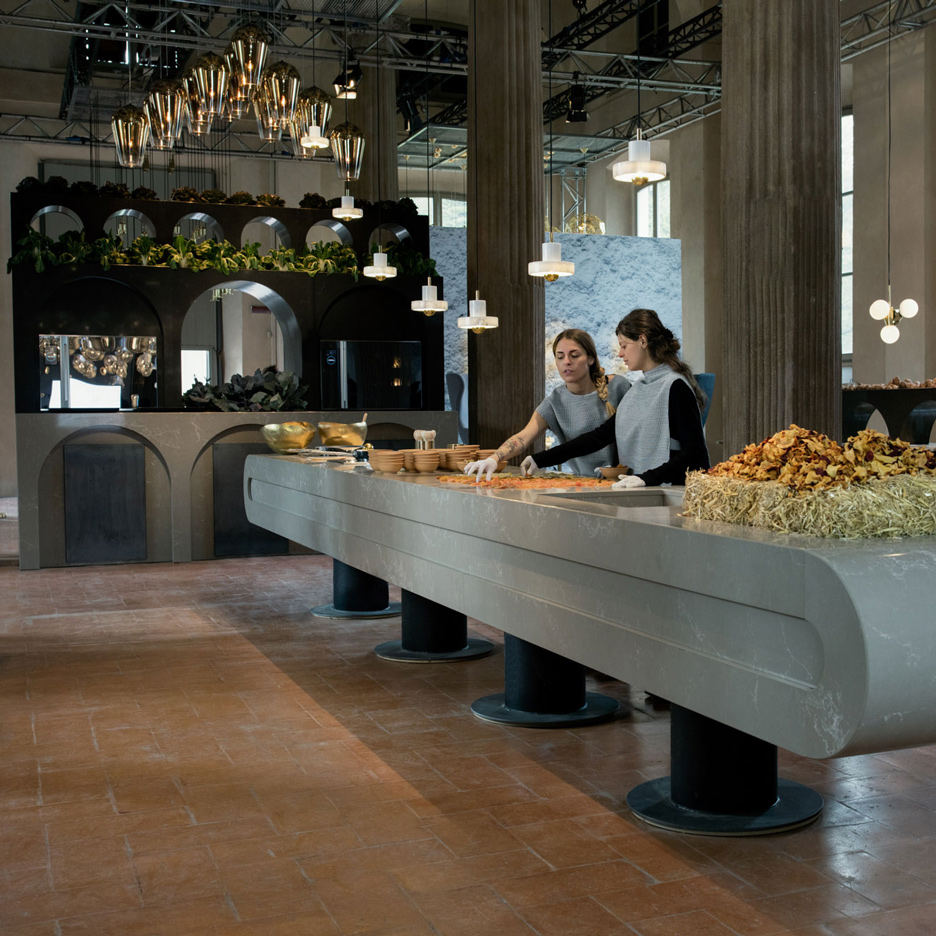 "We used a series of different Caesarstone products with different colour tones to really enhance the idea of the four elements."

The water-inspired kitchen featured a series of angular counters, worktops, tables and stools made from Caesarstone's engineered quartz material.

"I'm trying to make things with a surfacing material that appear as complete objects," Dixon explains. "Quite often people have worked with this material and they have either indulged in sculpture or tried to be practical. This is trying to get both in one object!"

The Earth kitchen integrated ovens and vegetable planters in huge units featuring arches and rounded angles, taking advantage of the thermoformable nature of the surface material.

"You can't bend stone, but you can bend Caesarstone," Dixon says. "So you can curve it, which is interesting."

Dixon used Caesarstone to create large, sculptural extraction hoods in the Fire kitchen as well as the countertops and units containing the hobs.

"Extraction is given as much importance as the pedestals on which the cooking takes place," Dixon says. "This is really about making the stove the centre of the kitchen in the way it used to be before modular kitchens."

The final kitchen, inspired by air, consisted of a single vertical slab of Caesarstone, with work surfaces and storage areas folding out from it.

"The Air kitchen is really just trying to find a way, of making a flat kitchen that you can retract and use very small amounts of space," Dixon says. "What's nice about that kitchen is that you can kind of fold it away."

Dixon says he wanted to design a series of spaces that moved away from a standard modular kitchen with identical units placed against a wall.

"By making the kitchens a bit more sculptural and putting them in the middle of the room it opens up a much more social space," he explains. "So these are really intended to be kitchens that are moved around and socialised at, rather than static kitchens."

While all the kitchens on show were designed as bespoke installations, Dixon says they respond to the current demand for more elaborate and sophisticated kitchens in people's homes.

"It reflects the way that people really use kitchens," he says. "I mean, there's no secret that the kitchen is the most popular place at parties: everybody loves cooking; everybody is a mini celebrity chef these days!"

"So it was really an exercise to try and open up what a kitchen could be and try to express the functions that go on within it," he adds.

The Restaurant was on show at Rotonda della Besana in Milan from 12 to 17 April. Elements from the water kitchen were first displayed at the Interior Design Show in Toronto in January. Caesarstone is planning to display the fire and air kitchens at other design shows later in the year.

This movie was produced by Dezeen for Caesarstone as part of a series of videos exploring the brand's products and collaborations with leading designers. See all the content as we publish it at: www.dezeen.com/caesarstone.