The CH22 lounge chair was part of Wegner's debut collection for the Danish company, and was first released in 1950 amongst other models such as the iconic CH24 – also known as the Wishbone chair or the Y Chair.

Manufactured to Wegner's original specifications, the CH22 is a low armchair with a solid wood construction. It features flat armrests with rounded edges and the designer's characteristic curving supports, and a handwoven seat made from paper cord.

The chair's backrest is made from form-pressed wood veneer, and features oblong cover caps over the join between the back and the frame.

"The CH22's complex, intricately detailed construction may explain why the lounge chair has long been out of production," said Carl Hansen & Søn. "Today, while parts of the production process have been modernised, the chair is still manufactured as it was more than six decades ago."

Through his design process for the CH22, Wegner also developed a blueprint for a dining chair with the model number CH26.

Although the CH26 was never manufactured, its design bears a striking resemblance to the CH22 and shapes, materials and joinery common across Wegner's work.

Because Wegner intended for the CH26 to serve as a dining or desk chair, the chair's height was determined in relation to tables and desks. 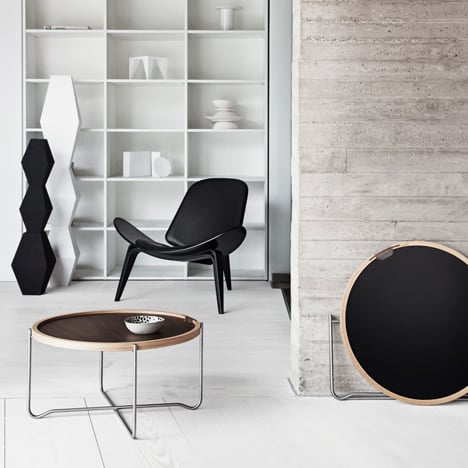 The only change made to the designer's original sketches was an extra two centimetres to the chair's height to better accommodate today's higher tables.

Both the CH22 and CH26 are available in solid oak and walnut in a variety of finishes. The seat is available in natural or black paper cord.

Carl Hansen & Søn had a long-standing relationship with Wegner, who designed more than 500 chairs before his death in 2007. Wegner's well-known Wishbone chair featuring a distinctive Y-shaped back and a reversible tray table are among the original designs the company continues to produce.

To celebrate the 100th anniversary of Wegner's birth in 2014, Carl Hansen & Søn reinstated the designer's 1950 logo for the company, which features the initials CHS in swirling white lettering on a white background.

The brand also put a 1955 wood and steel chair by the designer into production for the first time.

The CH22 and CH26 will be unveiled at the Carl Hansen & Son showroom in New York during this year's NYCxDesign festival, which takes place from 3 to 17 May 2016.