Venice Architecture Biennale 2016: Aileen Sage Architects has installed a swimming pool inside Australia's Biennale pavilion to symbolise the importance of this type of public space to the nation's cultural identity (+ slideshow).

Curated for the Australian Institute of Architects by Amelia Holliday and Isabelle Toland, with urbanist Michelle Tabet, the installation positions the municipal pool as a vital public space in Australian culture, on a par with Europe's piazza.

Landmark events in the nation's history have evolved around public pools, with protests by Australia's Indigenous community forming a pivotal role in highlighting racial discrimination, the curators told Dezeen during a tour of the pavilion.

Pools have now become a vital space for "healing racial and cultural division", they said, but many are shutting down through lack of funding.

"We're talking about a really important public space in Australia; it's been the backdrop to some of the best moments in our nation and the weakest as well," said Holliday.

"It's a very key public space in Australian culture, a place where everyone's equal, everyone's welcome."

"It's like taking away your piazza in Italy or other European countries," added Tabet.

"[Even] if you close the pools that are actively managed you'll still be left with these amazing rock pools that pepper the coastlines. You wouldn't be able to overcome the interaction between Australians and water." 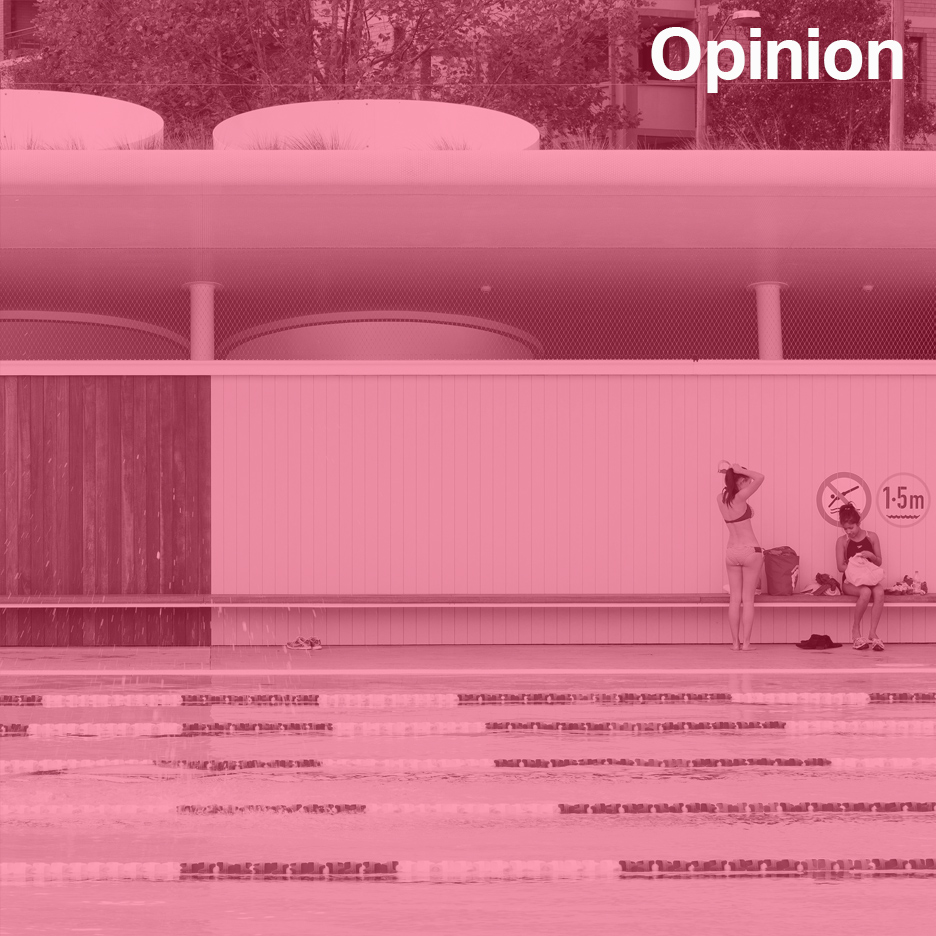 The pool fills one corner of the main exhibition space and is surrounded by bleachers and plinths in a combination of bare and lacquered wood and concrete.

Metal-framed deck chairs laid out to face the pool were commissioned from Indigenous workers at the Centre for Appropriate Technology and designed in collaboration with Alice Springs-based designer Elliat Rich.

The installation includes a range of sensory triggers: the space is lightly scented with chlorine, its surfaces patterned with reflections of rippling water, and pool signage in Latin-Italian hybrid is printed on the walls, in reference to Melbourne's popular Fitzroy Baths.

Art curator Hetti Perkins, the daughter of Aboriginal activist Charles Perkins who instigated one of the pool protests the concept is inspired by, is also among those who contributed interviews.

"There are lots of ways to assess the economic model of a pool," said Toland. "We need to understand the social capital of it too, that there are other values that we need to take into account."

"I think a lot of people's initial response when they heard what our project was about was like 'oh that's a symbol of luxury or an indulgence', but actually water is a representation of survival as well. It symbolises so much spiritually and on a basic human level too."

The Pool is the inaugural Venice Architecture Biennale exhibit to be installed in the new Denton Corker Marshall-designed Pavilion of Australia – the first 21st-century pavilion to be built in the Giardini.

"By identifying the pool's cultural importance to Australia, we are pushing for a more critical engagement with the civic and social values that underpin our work as architects," said the curators.

"The power and breadth of these places should not be underestimated nor simply jettisoned as uneconomical. Architecture can and does have an impact that transcends conventional economic models."

The pavilion will be opened by Olympic gold medal winning swimmer Ian Thorpe today and remain open until 27 November 2016.

The Pool is on show at the Venice Architecture Biennale 2016, which opens to the public this week and runs until 27 November.

Key themes to emerge from this year's biennale, which is directed by Chilean architect Alejandro Aravena, include the economic and refugee crisis, the changing role of the home and robotic construction.