Scandinavian firm White Arkitekter has won a competition to design a sustainable housing development on a sloped, uninhabited hillside in the Faroe Islands.

White Arkitekter is the winner of the Vertical Challenge category in the Nordic Built Cities competition, which asked entrants to design family homes for the steep terrain of Runavik in the Faroe Islands – an archipelago that forms part of Denmark.

Located between Iceland, Scotland and Norway in the North Atlantic Ocean, it comprises 18 rocky islands and features steep terrains, strong winds and geothermal heat, so offers plenty of challenges for architects.

Entitled The Eyes of Runavik, the winning proposal by architects Morten Vedelsbøl and Mikkel Thams Olsen includes five "eye-shaped" blocks, providing 100 homes with views over the fjords and the islands.

The three-storey buildings are designed with angled green roofs that mimic the sloping terrain.

Each cedar-clad block is envisioned as a self-contained ring-shaped settlement with its own microclimate, making it possible to grow vegetables and other crops while protected from the prevailing winds. 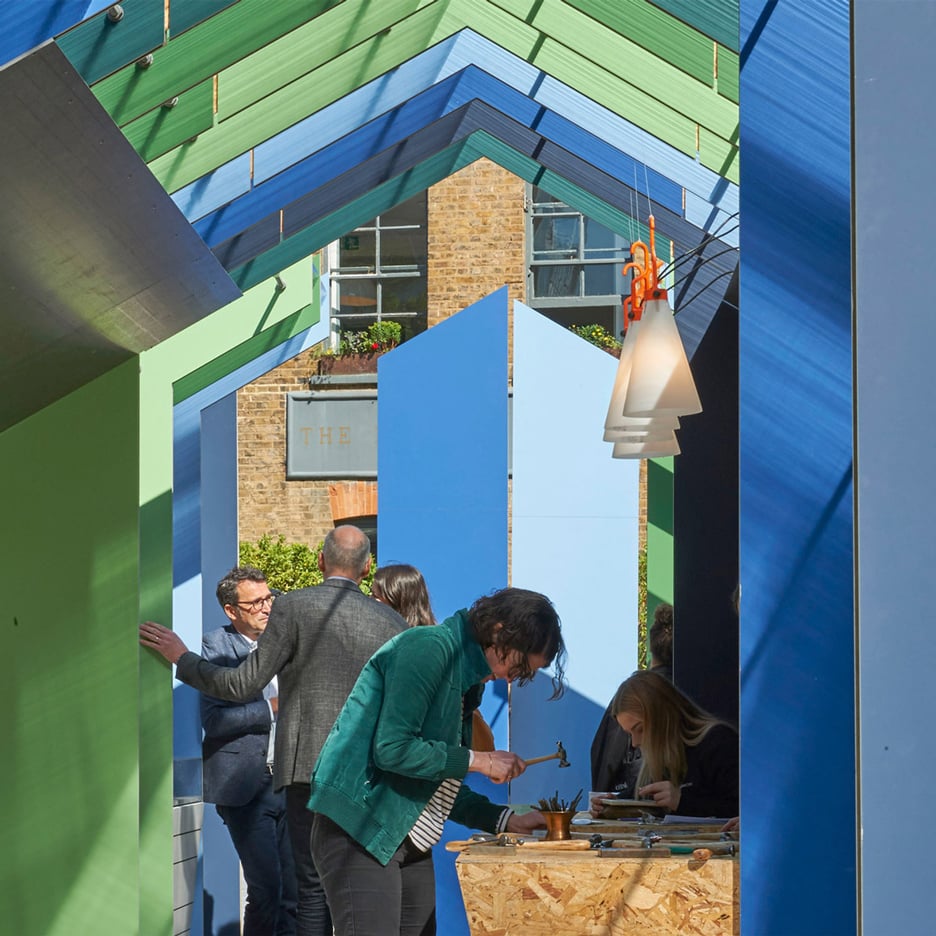 This references historical farming methods where an open meadow would be used for summer grazing and cultivated land would be used for growing crops. It also creates a secluded outdoor social space for residents.

"The wind is an omnipresent natural force lashing the Faroe Islands from the open ocean, the narrow fjords and the steep mountainsides," said Vedelsbøl.

"Traditionally, this has kept residents indoors when they want to socialise. Our proposal creates protected social areas which are sheltered from the rough weather."

The scheme was praised by the competition jury for "creating new thinking in relation to traditional construction in Runavik".

"Minimal impact starts with understanding the conditions, accepting them and making the most out of them," said Vedelsbøl. "We asked ourselves - how can we create an environment on such a steep slope and in such harsh weather conditions?"

"We decided to transform those challenges into our tools and identity markers."

The proposal integrates Passivhaus sustainability principles and renewable energy, so the development would have a minimal impact on the environment.

The contest was organised as part of the Nordic Built programme – an initiative to accelerate the development of sustainable construction in the five Nordic countries: Denmark, Norway, Sweden, Iceland and Finland.

There were six competition briefs, aiming to solve challenges in different Nordic destinations. Others included designing affordable and climate-smart housing for Sweden, revitalising a Norwegian transport hub and renewing a park in Denmark.

All six winners were announced at the Nordic Built Cities: Benchmarking Forum in Helsinki earlier today.

White Arkitekter has offices in Sweden, Denmark, Norway and the UK.

It recently won a competition to build a cultural centre and hotel in Sweden, which it says will be the "tallest wooden building in the Nordic countries".

Other recent projects include a pavilion at Clerkenwell Design Week and a copper-clad school.

Renderings are by White Arkitekter and Beauty and the Bit.