This ribbon of weathering steel meanders through a Copenhagen housing estate, creating a path, slide and aerial walkway (+ slideshow).

Called The Loop, the structure was developed by local studio Holscher Nordberg Architects for a social housing development called Værebro Park, in the northwest of the city.

The aim was to create a visible connection between an indoor public swimming pool, a public school and the apartment buildings on the estate.

The architects designed the structure to look like a single, continuous ribbon of material. They chose weathering steel –  a pre-rusted metal – to make it look slightly aged. 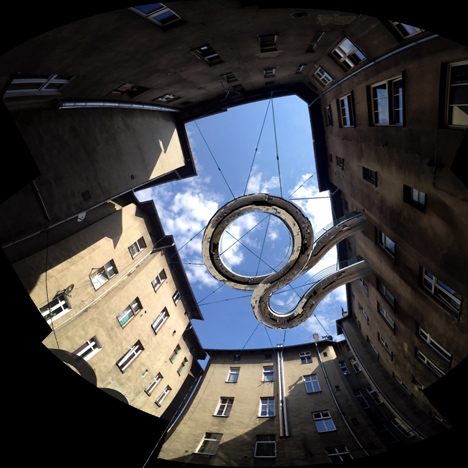 "The Loop aims to create a physical and mental bridge between the different users of the area," said the architects.

"The low budget yet aesthetic element is designed as a playful path offering a variation of activities."

Part of a wider plan to improve social conditions on the estate using architecture, the walkway is intended as a functional public artwork that encourages children to play together and neighbours to talk to one another.

Covering an area of approximately 500 square metres, it does a loop around a wildflower meadow and crosses an existing path, before connecting with a gentle ramp.

The ramp continues to rise as it loops around a cluster of trees, then slopes back down and passes underneath itself.

As it approaches a concrete wall enclosing another part of the park, the steel surface slopes steeply to form a slide with a polished surface that intersects with the top of the wall.

Tensioned wires create a minimal balustrade around the elevated sections of the walkway, while the sides of the slide are formed of steel profiles that taper as they descend towards the ground.

A cantilevered box that extends from the highest point of the concrete wall provides a viewing platform overlooking the entire park.

The project was developed by Holscher Nordberg Architects alongside members of the community.

"This strategy of user involvement created a sense of mutual ownership over the project," said the architects, "which is an important factor in order to make these types of public projects fulfil their intentions and potential."

Similarly, Glenn Howells Architects recently completed an elevated walkway that extends through the treetops at Britain's national arboretum, while a path designed by Tetsuo Kondo Architects loops its way up and around trees in an Estonian forest.

Photography is by Peter Nørby.